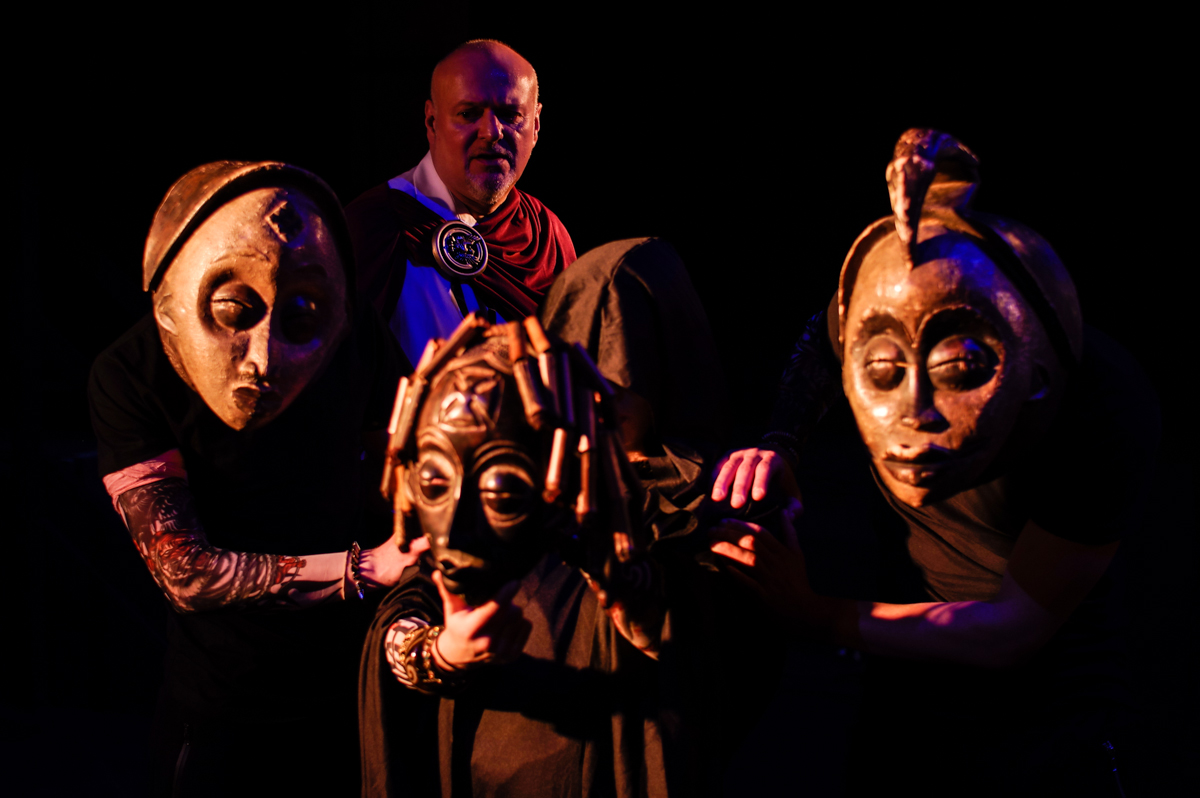 I have a soft spot for Titus Andronicus; its pitch-black humour, its mishmash of Roman brutality and honour with melodramatic Ovidian references, and its cartoonish, self-interested characters.

The Arrows and Traps company is large and enthusiastic, transparently sharing my love of this early Shakespeare revenge play. Ross McGregor’s production is clear, if slightly overwrought – it seems to take Julie Taymor’s Titus as a baseline, rather than a jumping-off point, adding elements to Taymor’s already busy Romodern world. In Taymor we have Young Lucius as our entry point – the innocent boy who witnesses the play’s full gamut of horrors. Here we have the same image gamely recreated by Pippa Craddick as the schoolboy, but we also have an increased role for the Clown (Annie McKenzie) who carries her pigeons around onstage for nearly the whole play, charming and innocent but ultimately fulfilling the same function.

A careful balance of modern and ‘Roman’ costumes is at the heart of the inventiveness of Taymor’s Titus – when Tamora and her sons are brought into the Wimbledon Studio in orange jumpsuits some of subtlety of the former is lost. Tamora feels generally diminished in this production, with a dumbshow scene between Saturnius and his new queen hammering home her status as political prisoner rather than cunning manipulator, despite a strong stage presence from Elizabeth Appleby.

These textures are overlaid onto a play which is so difficult to get right, especially as the earliest sequences include so many characters when only one is important. You only have the first scene of the play to convey Titus’ complex moral code and superiority complex, and the rest of the play hangs on what is communicated in those opening pages. Matthew Ward hasn’t got a moment to let his Titus reach the audience, and so he spends too much of later scenes getting us interested in him and his sorrow rather than ramping up for his revenge.

The production has flashes of brilliance, like Young Lucius sending Titus’ arrows as tweets – for the first time I realised that Titus’ madness might have political as well as vengeful method in it. But this quiet, clever moment followed a near incomprehensible scene when Titus actually handed out said ‘arrows’ to his sons – who then did some Wii archery: confusing and confused.

Spencer Lee Osborne’s Aaron is playful and striking. His weary humouring and inveigling of Chiron and Demetrius (played quite properly – as utter dunderheads – by Will Mytum and Alex Stevens) makes the most of Shakespeare’s early Machiavellian, who is ironically the play’s most human character when he joyfully look upon his lovechild, before imploding into Barabbas-like cackling villain in his final scene.

Overlong, dressed too far back, and with slightly too many actors onstage, this was a frustrating watch as good ideas intermingled with several familiar ones and a few that should have been shouted down. With engaging fights from Alex Payne, and rollicking good fun from the moment Titus has bared Chiron and Demetrius’ throats, this is nevertheless a production that needs stripping back to find the play’s troublesome through-line.

Produced by Arrows and Traps