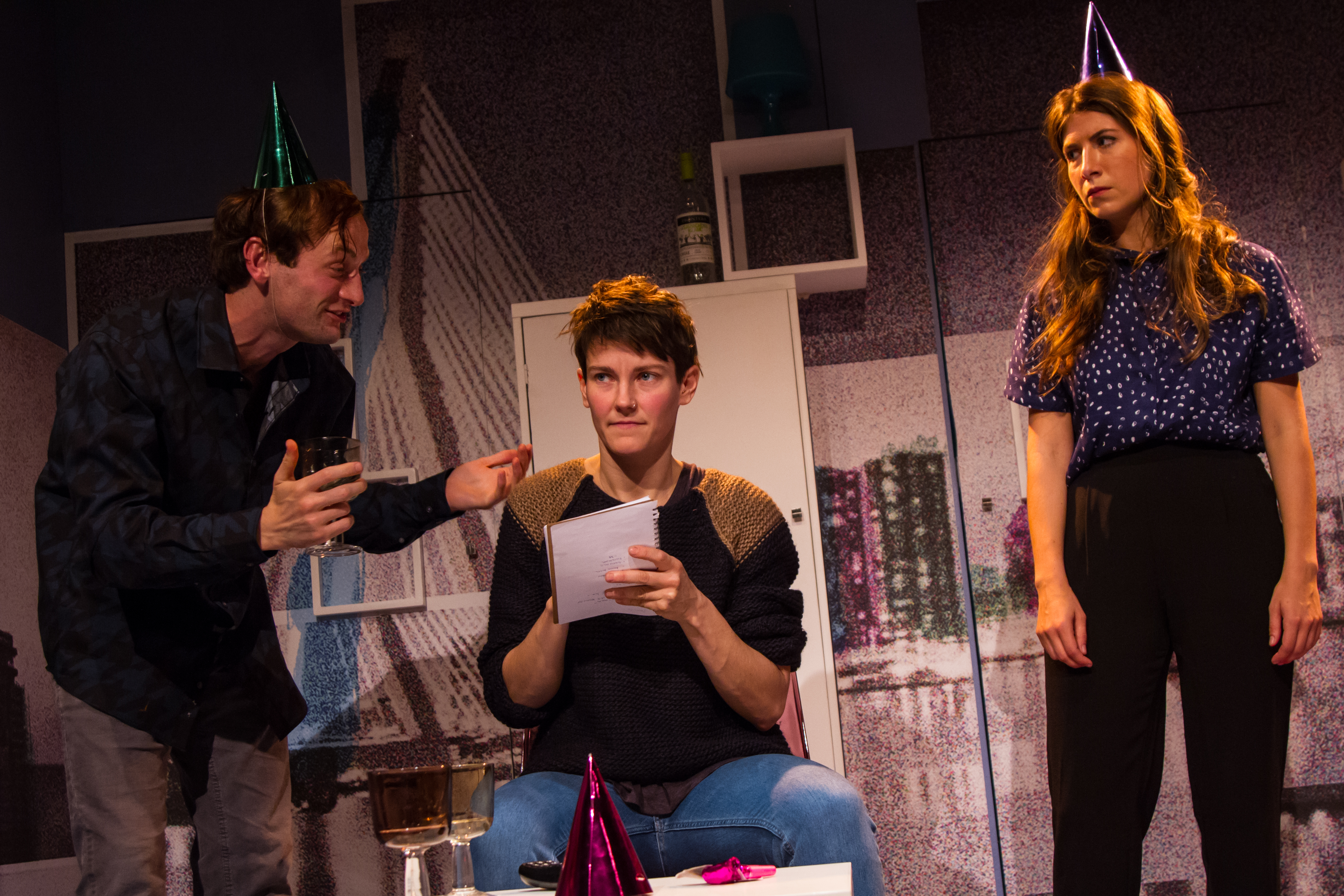 Jon Brittain’s Rotterdam is a play which makes you contemplate the nature of labels – ‘gay’, ‘queer’, ‘lesbian’ and ‘transgender’ – and the way language clusters around our self-definition, the different ways we say ‘I am this’ or ‘I am not that’, and the fixity or fluidity of actually being or becoming ‘this’ or ‘that’.

Rotterdam is a brilliant, subtle and engaging exploration of how these questions and pressures are activated in a couple who are in love, but at a point of radical and honest change. Alice and Fiona  have been living as a couple for seven years and are very much in love. Brittain’s play explores what happens to their relationship when one of them transitions into being a man.

Ellan Parry’s set is a bright and flexible space that does a good job of feeling like a stylish couple’s flat in Rotterdam, with a distinctly Dutch-feeling, sub-Ikea aesthetic and a weightless plasticity that helps it transform at will into a club, office, coffeehouse, and winter’s night frozen canal. The overarching feel of the piece is comedic, with the bright colours of the set and warm lighting suggestive of the playful tones of sitcom, but this doesn’t limit the expressive range of the show, and it descends poignantly into the deepest, darkest and most sensitive places in intimate relationships. At those points, the comedy continues to drop sublimely into the depths carved into the story.

Alice and Fiona are English expats living in Rotterdam. The opening scene, which takes place the day before New Year’s Eve, sees Alice sitting in front of a computer in their flat, trying and failing to send her parents the email she has written to explain that she is, according to spell-check at least, ‘a Lebanon’.

Fiona teases Alice about her reluctance to send this email, and the first lines of their characters are drawn: Alice is hesitant and struggling to define herself as a lesbian to the world at large, and Fiona has an easy confidence and has been out since she was seventeen. The plot is set in motion right away as Alice tells Fiona, ‘You’ve always known who you are, you’ve never felt like you had anything to hide.’ And then Fiona reveals something that she has been hiding – that she feels she is meant to be a man, to be Adrian. This sends Alice down her own rabbit hole, wondering, ‘then what does that make me?’

The central pairing is supported by Lelani, a 21-year-old Dutch lesbian who works in Alice’s office at a shipping firm, played wonderfully by Jessica Clark, and Josh, Adrian’s older brother as well as the ex-boyfriend and current best friend of Alice, equally brilliantly played by Ed Eales-White. Together the four characters are a relational quadrangle, and as the play moves into increasingly serious territory and shows the painful, angry stages of breakdown between Alice and Adrian, both Clark and Eales-White bring a deliciously reliable humour to their roles, which is a bright counterpoint to the darker themes.

But beyond the humour they bring to the piece, both Clark and Eales-White thoughtfully portray the more difficult nuances of feeling that arise as the bombs keep exploding in the main relationship, and the two of them experience the collateral damage. Clark’s sexy, bold, creatural and straight- talking Lelani is recognisably Dutch, very funny, and yet still young, still vulnerable. And Eales-White’s comedic timing is spot-on as Josh, the sort of character you fall a little in love with, because he emanates so much kindness for both Alice and Adrian.

This is a very fine production, with different elements spinning together to make something magical. The performances of Alice McCarthy as Alice and Anna Martine as Adrian are superb with McCarthy trembling on poignant verges between prim English repression and inner unravelling, her tightly controlled exterior masking extreme sadness and rage, as she experiences the arrival of Adrian primarily as the loss of Fiona. Anna Martine brings real artistry to her performance, from the delicate balances required on the gender/sexuality tightropes she walks, to the heart-rending moments at the plot’s climax, which brought me to tears.

The play has echoing significances that are only lightly alluded to but which make the explorations of society, gender and sexual identity feel rich, real and tangled, like the way in which the fear of parental abandonment for breaking sexual or gender moulds is different for each of them.

The choice of setting is important too; the play takes place in a time and location which are both symbols for change and upheaval: Rotterdam is described as a place where ‘You’re not supposed to stay”¦It’s a port. Everything’s moving on, it’s all just passing through, nothing’s standing still. It’s all on its way somewhere”¦else.’ And the main scenes take place around New Year’s Eve, with its resonances of endings and beginnings, and later, the Dutch national holiday Koningsnacht, or ‘King’s Night’, which until recently had been ‘Queen’s Night’ in the Netherlands.

One of the things that made this show feel so valuable was its constant engagement with the question of who a person really is: Alice and Adrian’s questioning dance with the labels which they have chosen, but also the labels assigned to them by our culture. Underneath this the play, beautifully and importantly, keeps pointing out that they are just two people, who are vast in the fullness of their humanness, and searching for the truest and most fulfilling expressions of themselves in terms of gender and sexuality, and frustrated by a society out of sync with truth, because it won’t recognise or accept their truth. And this thoughtful philosophical inquiry isn’t incidental embroidery – it is the whirring engine that drives the plot and characters.

Rotterdam unpacks the tender complexities surrounding self-discovery, self-definition and love in a way that honours the paradoxical glimmering of universal human beingness with the expression of specific identity. It is a brilliant piece of writing and I am still thinking about it all.

Joy is a writer based in Cambridge. Originally from America, she has lived in the UK since 1998. In addition to writing for Exeunt, she is working on her first novel with the support of a grant from Arts Council England. She also writes the blog mirrorlamp.co.uk. Her favourite things in life are books, yoga, meditation, discos and every kind of artistic expression.