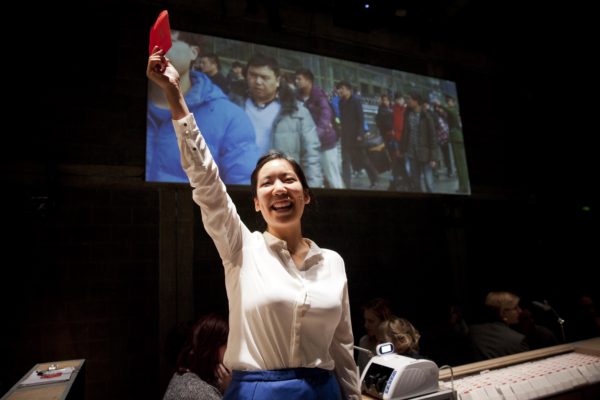 A few weeks ago, I visited Manchester’s Museum of Science and Industry. Like so many museums, it has a studied, uneasy ambivalence towards the past. This is a place that celebrates the technical ingenuity of the Industrial Revolution while seeking to mark its human costs. The awe and might of huge machines are placed next to black-and-white photographs of the overworked and undernourished humans who operated them.

But this isn’t a narrative that can be bracketed away in the past. As METIS’s show World Factory demonstrates, the human costs of modern consumer culture never went away, they just got pushed further and further out of sight. Or, perhaps, we chose to blind ourselves to them.

Because here’s the thing: we all kind of know about the exploitation and mistreatment and waste that World Factory exposes. We’ve seen documentaries about the textile industry in China or headlines about factories in Bangladesh. Very few of us can claim complete ignorance of how our clothes are produced. Yet, much like climate change (of which fast fashion is a not insignificant cause), it’s something that most of us live our day-to-day lives in a sort of denial about.

World Factory, then, isn’t necessarily telling audiences anything new. What it is doing, though, is placing theatregoers at the heart of a production process that they generally elect to ignore. Rather than presenting us with a drama about Chinese clothing factories, METIS transform the theatre itself into a Chinese clothing factory – or, rather, a series of factories. Split into teams and directed by the four performers in the guise of our “dealers”, we take on the role of factory managers, plotting different paths through the show based on the decisions we make. It’s all fashioned as a game, complete with a stack of Monopoly-style money.

The choices we as players are offered are starkly binarised. Sack half the workers or cut everyone’s pay? Improve conditions for workers and quickly go under, or keep wages low and stay afloat? From within the game, this can feel limiting, but as a dramaturgical strategy it’s inspired. On the one hand, it generates fraught ethical and political discussions, forcing us to speculate on the other possible (but unavailable) options and on the unspecified ramifications of our decisions. On the other hand, it’s a powerful formal illustration of the apparent lack of choices experienced under fast-paced consumer capitalism. We don’t just see the ethical conundrums faced by factory owners; we experience them.

There’s something queasy about the gamifying of experiences that are so very far from a game for so many people – but then again that’s the point. World Factory both encourages audiences to play along, sucking us in with the thrill of making a profit, and intermittently jolts us out of the fantasy and into the real world it’s mimicking. The more we’re absorbed in the game, the more wrenching it is when we’re pulled out of it. The more we play ruthless capitalists, the more bitterly we reflect on our decisions when forced to take pause.

The alternating pace of the game is crucial. As co-director ZoÃ« Svendsen has noted, “ethical practice takes time” – time that both World Factory and consumer capitalism offer little of. The team I’m on makes relatively few choices in the hour allotted for the game (and is repeatedly hurried along with barks of “time is money”) because we keep finding ourselves torn between pursuing our own ethical principles and “playing the game”. Our shoddy compromises make us both bad capitalists and bad employers. Everyone loses – a message that World Factory drives home with force.

One of the quieter, more melancholy moments of the show implicitly mourns the loss of the craftsmanship that used to go into garments that would be worn and loved and repaired. Now, by contrast, fashion is throwaway. I found myself reminded of Richard Sennett’s book The Craftsman, which argues that “the craft of making physical things provides insights into the techniques of experience that can shape our dealings with others”. Craft, for Sennett, offers ethical possibilities, while the opposite seems to be true of the fast, cheap fashion that suppliers like our imaginary factories serve.

Informed by a complex tapestry of research and offering seemingly endless possible permutations, World Factory is itself a piece of master craftsmanship, meticulously constructed. Beyond its function as a performance, the project is a rich and vital resource, complete with an online “Digital Quilt” of references. Unlike some participatory shows, which operate mainly on a surface level and offer empty promises of audience “empowerment” or “emancipation”, you can sense the depth that lies beneath World Factory, which uses the disempowerment of its participants as a provocation to delve further into the tangled threads of global capital.

Towards the end of the show, there’s an unexpected echo of Trump, as one of the performers calls on us to invest in manufacturing closer to home and “make Britain great again”. Whether or not this has been added since the US presidential race, it certainly resonates (however horribly) with the present moment. It also points to the relevance of this piece beyond the global fashion industry that it directly interrogates. The questions raised by globalised clothing production are also questions about the economy, about politics, about the nature of work in the twenty-first century, and about the future of our planet under a system that’s designed to keep devouring resources and producing waste.

“This is where it all began,” performer Lucy Ellinson reminds us – an aside from the main performance, but a significant one. Manchester, the home of the Industrial Revolution and the heart of the textiles industry in the nineteenth century, is an apt destination for World Factory at the end of its tour. This is the city once nicknamed ‘Cottonopolis’. This is the city where Engels wrote The Condition of the Working Class in England. But these are not just static markers in our national history, to be carelessly skim-read in museum displays. Sure, the world has changed, but the inheritance of those mills and factories – and the increasingly brutal form of capitalism that they helped to drive – remain with us. The real question is: do we keep closing our eyes to it?

World Factory is on at HOME in Manchester until 10th December 2016. Click here for more details.