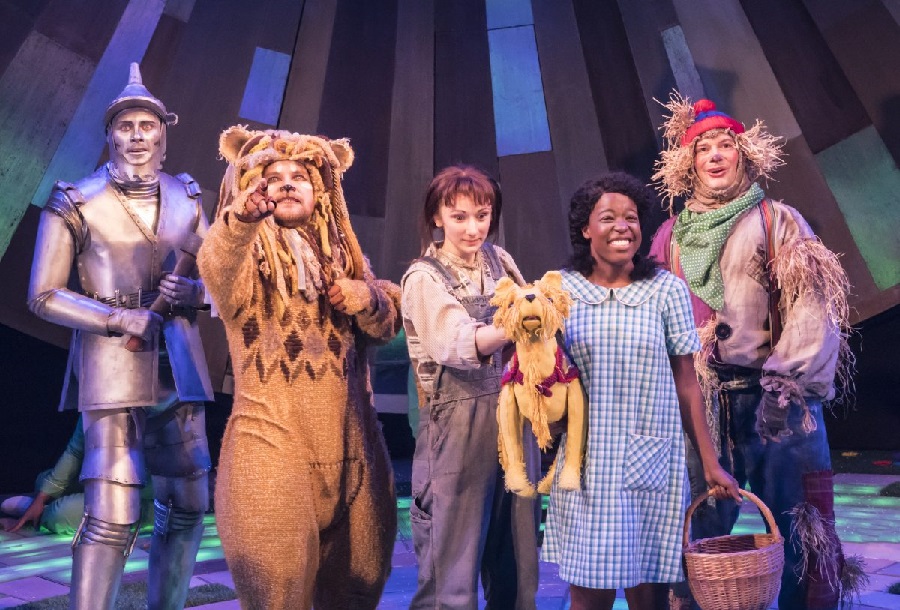 It’s that festive time of the year, it’s the Crucible and that can only mean one thing – it’s the annual Sheffield Theatres Christmas musical. It’s become almost as much a part of Yuletide tradition as the pantomime these days, and while some choices haven’t been without controversy (former artistic director Daniel Evans had people call for his resignation after he programmed Sondheim’s Company in 2010), it’s usually a guaranteed highlight of the theatrical year.

The Wizard of Oz is new artistic director Robert Hastie’s first stab at the Christmas musical. It’s a brave choice, if only because it’s a production so closely associated with the 1939 film, but Hastie adds enough touches of his own to keep it fresh, while managing to keep the purists happy too. It’s a strange experience watching Oz come to life onstage, especially when you realise so many lines are now almost part of popular culture: “I’ll get you my pretty”, “I’m melting…” and, of course, “There’s no place like home.”

The first challenge that Hastie passes is the transformation of the stage from grey, old Kansas to the Technicolor marvel that is the Land of Oz. Janet Bird’s set is an ingenious creation – her version of Kansas is as sepia-toned as the film’s is, but then the tornado hits. Special effects are eschewed here, as members of the ensemble grab debris and perform a ballet while Toby Higgins’ orchestra creates a maelstrom of sound. The effect is almost hypnotic, especially as the centre of the stage lifts up to reveal the bright, garish colours of Oz. It’s so impressive it even draws gasps from the audience.

It’s the little touches that Hastie adds that make his production such a success, though. Toto comes close to stealing the show, appearing first as a real-life, impossibly cute dog in the Kansas scenes and then as an uncannily realistic puppet (controlled brilliantly by Rhiannon Wallace) when the action switches to Oz. Gabrielle Brooks, last seen on this stage in the premiere of current West End hit Everybody’s Talking About Jamie, is an exuberant but never irritating Dorothy, and her solo rendition of ‘Over The Rainbow’ is an early highlight.

Andrew Langtree (Scarecrow), Max Parker (Tin Man) and Jonathan Broadbent (Lion) make up the rest of the team, and all demonstrate strong voices and some innate comic timing. Parker, in particular, is a joy to behold as the Tin Man, demonstrating some real aptitude for physical comedy, while Catrin Aaron cackles like a true pantomime villain as the Wicked Witch of the West.  The reveal of the titular magician himself is nothing short of spectacular as well.

If there’s an issue with The Wizard Of Oz, it’s with the source material itself, as the songs, iconic though they are, can be a bit dreary. ‘We’re Off To See The Wizard’ and ‘Ding Dong The Witch Is Dead’ are brilliantly choreographed by Ewan Jones, but the numbers themselves sound pretty old-fashioned these days. However, ‘Jitterbug’ (famously cut from the film) is enlivened by some jazzy arrangement, and Richard Howell’s impressive lighting design sees the Yellow Brick Road come to life before our eyes as the song plays.

It’s a fine production to round off Hastie’s undoubtedly successful debut year as artistic director, then. If the predictability of pantomime turns you off, then this really is the perfect alternative for families looking for entertainment at Christmas.

The Wizard of Oz is at the Sheffield Crucible until January 20th. For more details, click here.

Review: The Wizard of Oz at the Sheffield Crucible Show Info