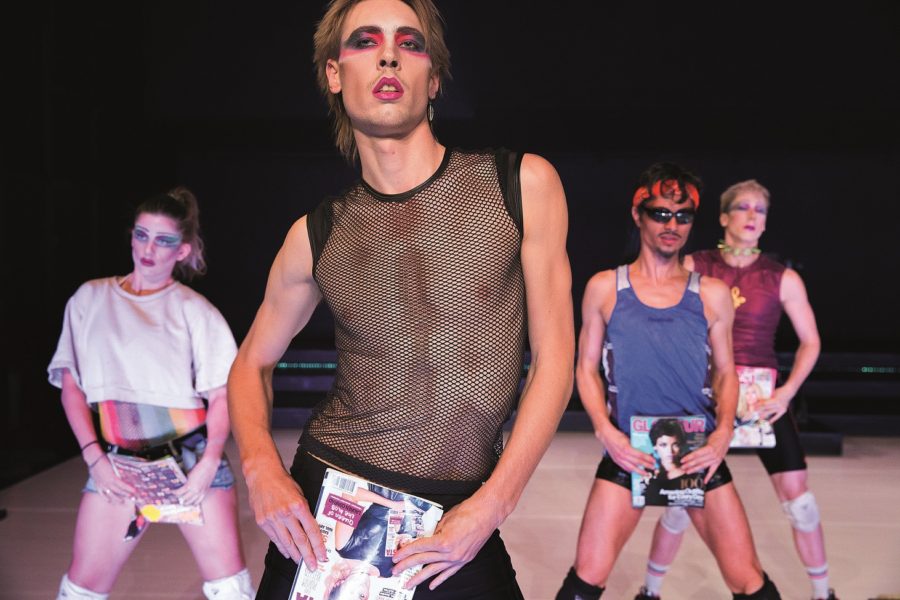 Choreographer-performers Florentina Holzinger and Vincent Riebeek thrive on controversy. Shock is their shtick. At last year’s Transform Festival, there was a fevered buzz of anticipation around their show SchÃ¶nheitsabend, which traded – economically and artistically – on its promised provocativeness. Here, in the follow-up, Wellness, they have that reputation to live up to and surpass.

As in SchÃ¶nheitsabend, framing is everything. This time there are fewer overt nods to the outrageousness to follow; we already know what to expect without them telling us. Instead, the lens is adjusted to focus on the (implicitly related) themes of narcissism and artistic ambition. At the show’s opening, Florentina is dismayed by a magazine profile of her that she protests is full of lies. She just wants to express herself. They’ve got her intentions all wrong.

This prologue folds into an extended yoga-class-cum-meditation-session-cum-motivational-speech-cum-orgy (pun intended). From orders to breathe in deeply and relaaax to X Factor-style sing-offs, it’s a hallucinatory catalogue of the contemporary obsession with the individual. That obsession is captured brilliantly in the show’s title, which rolls together physical health, emotional wellbeing and shallow spirituality into a social-media-ready image of perfection. The very word, ‘wellness’, has an over-Instagrammed late-capitalist sheen. It’s at once made-up sounding and ubiquitous, the hashtag of bloggers and vloggers and spa getaways.

The show’s dreamlike journey of discovery is led by leotard-clad RenÃ©e Copraij, whose eerie, almost mechanical voice intones instructions through a headset microphone, aerobics teacher style. Holzinger and Riebeek are two of her ardent followers, alongside fellow dancers Antonio Pedro de Almeida Coimbra Maia and Maciej Sado. Through a strange yet compelling blend of yoga-teacher-speak, directorial jargon and exercise class motivation, Copraij guides the performers through an increasingly bizarre training course, as they set out to pursue their best selves.

There is, naturally, the promised sense of shock. One of the earliest surprises is the most gloriously silly, as liquid cascades from the punctured false breasts of a suspended Copraij, christening the performers who frolic below in an image of something like rebirth. Later revelations are more gasp (and potentially disgust) inducing. I don’t want to give too much away, but let’s just say I’ll never look at an egg in quite the same way again.

The really astonishing moments, though, are those of surprising beauty rather than surprising crudeness. Having been thoroughly drenched by the contents of Copraij’s fake boobs, the quartet of now naked performers writhe together under phantasmagoric coloured lights. The effect is less erotic than it is captivatingly alien. The dancers’ slick, shimmering limbs blur together, merging into one twisting, thrashing creature. It’s a startling feat of bodily contortion and theatrical illusion, and unlike anything I’ve ever witnessed before. In another dazzling sequence, the show assaults its audience with pounding music and intensely bright flashing lights, leaving us with only the woozy, intermittently visible outlines of the performers’ bodies.

It’s hard to tell with Holzinger and Riebeek what’s satirical and what’s sincere – and they want it that way. At times, the choreographic vocabulary seems to hint at genuine transformation, while at others it rips the individualistic culture of personal wellbeing and self-discovery to shreds. Without being overtly political, the piece suggests the apathy and acceptance that contemporary mindfulness encourages. Wellness as a concept is about the isolated individual and the present moment, rejecting the collective gesture or the work of building a better future. It says ‘just be’, which might as well translate into ‘just accept the status quo’.

Not that Wellness is ever quite as simple as that. At the very start, Copraij insists that dance is about clear communication. Is this just another tongue-in-cheek statement? There’s little that’s clear in Holzinger and Riebeek’s performance, at least by any usual standards of clarity. But then communication is not only about the straightforward transmission of straightforward meanings. Bodies also communicate in ambiguous and fascinating ways, as Wellness makes abundantly apparent.

My concern, though, is that Holzinger and Riebeek are too reliant on the frisson of provocation. Shock has a sell-by date. The duo might still have an impressive grasp on their audience’s expectations, which they tease with a sly, subverted nod to the most outrageous moment in SchÃ¶nheitsabend, but the tactic of scandalising is one with diminishing returns. Where have they left themselves to go next?

Wellness is at Transform 17 until April 20th. For more details, click here.