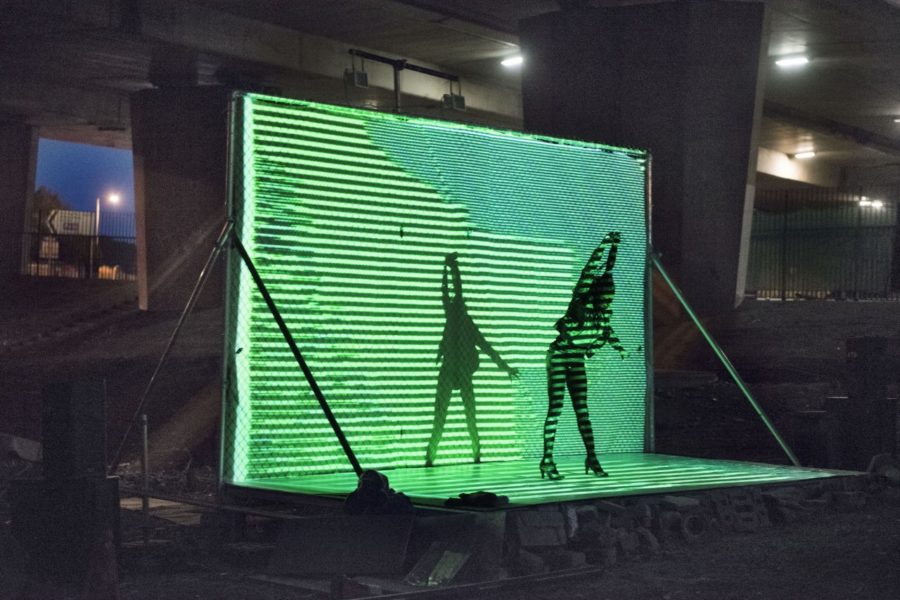 First commissioned by Tramway and performed in May 2016, Mele Broomes, Dav Bernard and Bex Anson’s JG Ballard inspired collaboration VOID is re-staged at this year’s Dance International Glasgow festival. Moving out beyond Tramway’s walls as part of the event’s off-site programme, this adaptation of the Ballard’s Concrete Island – a tale of a 35 year-old architect who crashes his car onto a traffic island between motorways and can’t escape – is re-sited to a sunken area of derelict urban space somewhere under the M74; one of the many stretches of this motorway that soars over the heads’ of Glasgow’s Southside.

VOID is a successful piece of work that represents Ballard’s critique of urban spaces for a contemporary audience, showing that his concerns about a way of living characterised by anxiety, continued acceleration and perpetual discomfort are still the concerns of city-dwellers today. Broomes’ acrobatic choreography realises this unease, desperation and eventual willing assimilation, her attempts to escape collapsing her body into something altogether more vulnerable, whose sole concern is to survive, to get from moment to moment in the urban landscape. Working with a novel whose language is exact, a prose that is blunt and violent, Broomes’ choreography isolates what is important about the text, so that even audiences who aren’t familiar with the source, and might perhaps find the narrative difficult to follow, will still experience its affective force.

Dav Bernard’s audio-visual design is mesmeric, an unending backdrop of shapes, neons and glitches, an always moving matrix grid that envelops and traps its inhabitant within its lines. Sitting somewhere between the ’60s, ’70s, ’80s and ’90s, the imagery we are presented with feels timeless, yet still somehow dated. Perhaps these images speak to our contemporary urges towards the retro, an aim to find some sort of grounding, a past or lineage or nostalgia that can survive in a digitised culture where things seem to both be instantly discarded and stored for all of eternity, where we are oversaturated with information yet none of that information is of any use. These images dancing across Broomes’ body seem other-worldly, historic and contemporary all at once.

The decision to perform VOID “in-situ”, outside of the black-box theatre, is considerably less successful, at times jarring unhelpfully with the content of the work. By way of example, the sound design throughout the work is really excellent – a shrillness, an exhausting and quite grammatical kind of noise, like a sentence made entirely out of commas – but in this staging, with a raked set of seating facing end-on to a clearly constructed performance space, the speakers play sound of traffic passing, drowning out the sounds of the actual traffic passing us by.

Decisions such as this reflect a lack of engagement with the materiality of the site and, while there is no doubt it is a logistical success, this re-siting never feels integrated into the work, but is instead simply decorative at best and, at worst, a bit of a gimmick. Watching on, it is difficult to know how the experience would be qualitatively different if it was still in its black-box setting. The resulting experience feels like something of a missed opportunity.

Dance International Glasgow’s desire to take work outside of traditional spaces with it’s off-site programme is commendable, but the question as to how these works will engage with the localities of these spaces, rather than simply reconstruct traditional spaces in non-traditional contexts, remains a difficult one to answer. During the performance a group of young-ish adults pass by and heckle the performer and audience in a manner that is anti-social, misogynistic and abhorrent. Yet there is also something unnerving about how the event’s security staff go over to the youths, and, far out of our ear-shot but still in the corner of our vision, move them on. My response is to pretend that this isn’t happening, to focus on the stage with some vague aim of supporting the performance in it’s desires and right to continue existing.

Dance International Glasgow, nor this performance, should not be expected to have definitive answers, yet this moment seems to encapsulate a whole range of tensions and resulting questions. What does it really mean to take work outside of traditional spaces, and what can these attempts tell us about the other kinds of islands, those that aren’t concrete, that we live on?