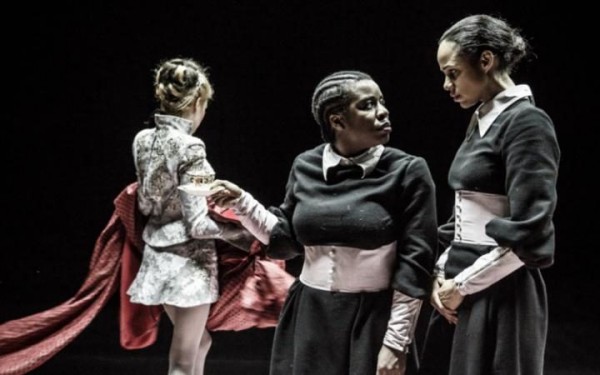 There is a box on stage. Opaque walls fade, become transparent. Now it is a frame. A cage. In it, two women are fighting for their lives.

Although less dependent on shock tactics and gore than in the Shakespearean productions he is best known for, Jamie Lloyd’s production of Jean Genet’s The Maids (in a translation by Benedict Andrews and Andrew Upton) still manages to be visceral and powerful, even if it never quite adds up to the sum of its parts.

Zawe Ashton and Uzo Aduba are sisters Claire and Solange, maids to the Mistress, who chafe against the restraints of their domestic servitude both actively and passively – in the house, they spend their time creating elaborate, sadomasochistic fantasies where they murder their employer, while, in the real world they have shopped her lover to the police, setting in motion a cataclysmic string of events.

It’s a production that is both impressionistic and immediate; reality and fantasy wrestling for supremacy, each as ugly as the other. It is a play whose language is obsessed with the body, its smells and its secretions, simultaneously disgusted at the workers’ stench while attracted to their earthiness (Claire dabs constantly at sweaty armpits, Mistress fears the contamination of the kitchen seeping into her boudoir, the robust charms of a never-seen gardener are much commented on.) It hides its dark heart under superficial prettiness – a florists’ worth of rose petals, a McQueen dress, a fur coat, a moment’s throwaway kindness – but the faÃ§ade cannot hold for long.

The racial overtones of having two black women in the role of the maids are unavoidable and smartly used, without being hammered home. There’s a specific poignancy when Claire strokes Solange’s braids, praising her lovely hair: it’s hard to miss the implication she is rebelling against the idea that Mistress’ expensively styled blonde locks are society’s ideal of ‘good hair’. The language of ‘Mistress’ and ‘Master’ uncomfortably evokes slavery, both bygone and contemporary (the show’s programme contains an interview with staff of the ‘1%’ and is littered with stats about domestic service, keen to make the point that economic inequality and exploitation isn’t going anywhere anytime soon).

A piece like this stands or falls on its central performances, and both Ashton and Aduba are outstanding. As the spoiled Mistress, Laura Carmichael has little to do but play the rich bitch, but she does it with icy aplomb – a glossy, scathing sybarite who romanticises herself and her relationship with her maids: she sees herself as giving and nurturing, without realising how her mercurial generosity, revoked on a whim, is its own kind of cruelty. She may claim her maids are ‘family’ but cannot even be bothered to distinguish between them, to learn which one is which – they are merely props to her internal drama, so why should it matter to her?

In a play where identity and individuality are at the crux of the action – one of the maids’ most furious provocations is this muddling up of their names – it is ironic that identity is so fluid, appearances so deceptive. When we first encounter them, Claire is Mistress, Solange is Claire. Personas blur and shift – even Mistress, devoid of empathy, toys with various roles: the tragically devoted lover standing by her incarcerated man, though she casts this off easily enough, when her fortunes turn again. The women are chameleons, and the sisters give impressively physical performances, internal transformations externalised and displayed, examined in harsh lighting.

Ashton’s Claire-as-Mistress is a grotesque caricature of glamour in her slathered on rouge, looking like a drag queen at the end of a very rough night (a deliberate connotation, which an interview in the programme makes clear, keen to avoid any hint of homo/transphobia and evoking drag as a way of critiquing the norms of femininity and beauty – which tend, of course, to be the exclusive preserve of the white and wealthy). Her make up imperfectly wiped off and her gown removed, reduced to herself she is frail, a rag doll, seeming sometimes almost boneless as she flails about the stage; child, woman, victim, predator. Her performance is anchored against the robust solidity of her sister, and Aduba in contrast seems to fluctuate in her very mass, becoming unmoveable, a gravitational force or a ballast against the storms. She is, in her own way, as capricious as her Mistress – loving, dangerous, furious and fiercely protective, sometimes all at the same time.

Their relationship is twisted to incestuousness by toxic proximity, frustration and deprivation: having only each other, they become their all; when things go awry, they inevitably turn on one another, and themselves. A despairing Solange fantasises about the aftermath of killing her sister, of finally being seen, even if as a murderess: in a life of crushing anonymity, is notoriety the best to be hoped for? Claire sees a different release: in death, subsumed into her sibling, the only kind of freedom she can let herself believe in.

Long-time Lloyd collaborator Soutra Gilmour’s design is as striking as ever, stylishly evoking the women’s lives and its boundaries. It is played in the traverse, so there is nowhere to hide; the maids enter and leave through the floor while Mistress strides confidently on and offstage – only the wealthy get to come and go as they please. Just because you cannot see the bars, does not mean they are not there. The set is covered in flowers, but these are funeral blooms; they are the petals strewn before aristocrats on ancient dirt floors to hide the stink of filth and shit. They represent the Sisyphean drudgery of domestic servitude – no sooner painstakingly cleared away than they descend again, covering all, and none of the sisters’ efforts are appreciated.

Despite its undeniable power – and the unequivocal joy of seeing an all-female, multi-racial cast in such a high profile production – the piece doesn’t bite quite as hard as it could. A tauter running time would have better captured the urgency of the maids’ situation – in lives that have always been dictated by a timer, they are on a clock, needing to act before their betrayal is unmasked. But the production gives too much space to grandstanding set speeches that, impressive as they are, occasionally feel like an actor being given free rein at the cost of the overall story, and mean the pace sometimes drags, allowing the tension to dissipate more than it should.