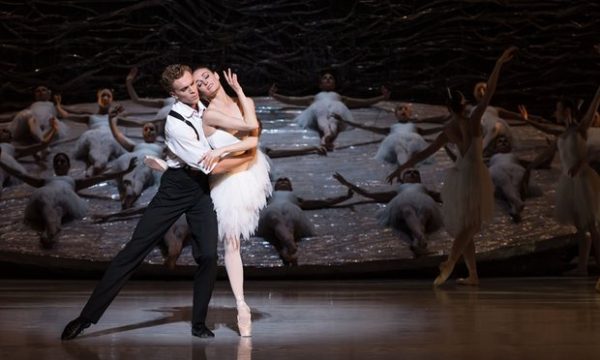 In 2002, choreographer Graeme Murphy refashioned Swan Lake into a royal love triangle, having taken inspiration from Lady Di’s famously candid remarks (“there were three of us in this marriage….”) about her painful conjugal situation. I read about this Charles and Camilla angle before the performance and felt dubious. Would it be a sordid Windsors-on-pointe soap opera, a ballet version of a Hello magazine cover story? (Charles famously got taped by the News of The World on the phone to Camilla saying something along the lines of “I am jealous of your tampons.” Would we be treated to a buck-toothed prince dancing an erotic pas de deux with a feminine hygiene product, plucked surreptitiously from his mistress’ handbag?)

Fortunately, there’s no need to be concerned on that front. Don’t expect this Swan Lake to feature Prince Philip in tights, but don’t expect any sorcerer-owls either. As well as taking certain liberties with the score, Murphy’s Edwardian-era production disposes of the overt fairytale and the dual ballerina role of white and black swan. Instead it’s a recognisably human drama. Here, Odette is a fragile young woman who’s about to marry Prince Siegfried, only to glean that he’s having an affair with the sensual Baroness von Rothbart. Driven to despair, Odette makes a scene at court and is dispatched to an asylum, overseen by sinister orderlies in white. There, she’s doused in cold bathwater and takes refuge in imagining a bevy of swans. And so forth. Having seen the Baroness at work in a negligee during the prologue, we’re introduced to the courtly milieu at a garden party scene rich in Renoir-esque detail, with a lake shimmering in the background. Though some of Murphy’s neoclassical choreography is a touch unmusical – lots of legs swinging over heads – other sections are danced with engaging crispness. There’s plenty of boater-hatted brio.

Unlike Matthew Bourne’s Swan Lake, which also strips away the fairytale, Murphy’s production doesn’t quite have the complexity of a full-on psycho-sexual drama (and lacks Bourne’s touches of wit). Siegfried is still just a stereotypical princely type with added libido and a customary self-pitying solo. (“Oh dear, I am a man. I am torn between two beautiful women. One is innocent and one is up for it,” he proclaims with a despondent pirouette.) But I appreciate Murphy’s efforts to flesh out the Baroness’ character beyond ‘power-hungry minx who wears black.’ When Odette returns from the asylum and captivates the court, and the prince, the Baroness’ solo is a convincing combination of faltering vulnerability overlayed with hip-wiggling bravado, punctuated by insistent Latin claps and percussive pointe shoe bangs. Meanwhile Amber Scott is truly compelling as Odette, journeying from otherworldly delicacy to ragged desperation. The famous 32 fouettes, traditionally Odile’s sexually triumphant calling-card, here signify a frantic deterioration. The ensuing ‘white act’ references traditional Ivanov steps, though they’re given a neoclassical edge, with added swoops and jolts. I was worried that this would merely prettify mental illness, but it successfully conjures an emotional landscape populated by a calm yet sorrowful sisterhood, into which visions of the prince will inevitably intrude.

Of course, when you have a gentle ballet heroine who goes mad because of a cad the comparison with Giselle is inevitable. Murphy’s work isn’t just derivative though. Elements of Odile (as a metaphor for death) are revealed within Odette herself, rendered physically when she leads a corps of black swans in the final act. These swirling swan maidens, though dainty, come to represent insistent tides of depression and despair, an inexorable pull towards suicide. If only the prince could be overtaken by the nihilist surge and be drawn into the death-wish too – instead he avoids a watery demise and is left to grieve. Give it a few years and he’ll definitely get a new girlfriend who’s 20-odd years his junior.

The Australian Ballet are performing Swan Lake at the London Coliseum until 16th July. Click here for more details.