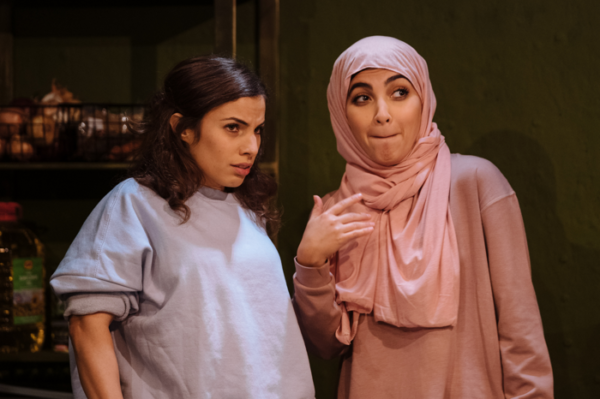 Out of Sorts at Theatre 503. Photo: Helen Murray.

Chances are, you’ve already seen that the Guardian and the Stage gave Out of Sorts four stars each; you might even have read past the rating to find that it’s “a compassionate, generous and well-observed piece of writing that accurately captures all the small tug-of-wars that occur over religion, language and food”, also noting that although it “might have run the risk of treading familiar ground around culture clash and identity, Danusia Samal’s script gathers complexity and emotion as the piece progresses”. So, what else can we talk about?

[The line perpetually skated: between wanting to fit in and wanting to shatter convention.]

Tanuja Amarasuriya, director of Out of Sorts, wrote a blog post in 2017 about the “white structural bias” of the British theatre industry, and how it leaves her feeling like “the wrong kind of Asian”, because she doesn’t make the “issue-led or autobiographical” work expected of brown and black people.

“At what point do our stories get to be universal?” she asked.

“At what point do universal stories get to be authored by us?”

[Between writing that strives for critical and analytical, and writing that sinks into confession, that speaks of crying helplessly for the final fifteen minutes, crying so snottily that it became hard to breathe.]

There’s a whole kitchen running along the back wall of the tiny Theatre 503 stage. A wire mesh shelving unit, oven and hob, cupboards and work surface, fixed shelves laden with jars and packets of tea. Plus a breakfast bar with a fridge beneath. Only one thing is missing: the kitchen sink. And let’s face it, that’s probably just expedience and economics, but from where I was sitting, it felt like a brilliant, sly disruption, an encouragement to be attentive: to notice difference, and think about it differently. Perfect for Danusia Samal’s story of trying to grow up, be independent, and bear the burden of parental expectation, universal but told from a distinct perspective.

The kitchen is in fact two rooms blended: one belongs to the Muslim immigrant family home of Zara; the other to Zara’s white best friend, Alice. In one plates are heaped with couscous, glistening kebabs, pitta breads, soft hummus; in the other, food comes packed in prissy cardboard boxes from a global whole-food chain masquerading as a local deli, a shop Zara notes is putting the real independent, run by a Mr Singh, out of business. In one home, Zara causes consternation by claiming to be a vegan; in the other by choosing a £4.49 bottle of wine from Lidl instead of something more “classy”.

These details serve as useful reminders that nothing Zara is dealing with is simply about family or friendship: Samal is also concerned with socio-political structures and the ways in which they’re manifested by colonisation and unsettled by globalisation. How cultures and capital move across the world; who benefits from that, who is exploited, and what it means to be able to choose. What stories emerge from those movements and how those stories are told.

[In the interval I text a friend to say how much Zara’s family reminded me of home, of the schisms of late-teens and early 20s, clasped in a safe package that I could gaze at from a distance, glad to have emerged the other side and just be me. The years of coming home from university knowing less and less of the language of home, every holiday losing another clutch of words. Two years, two whole years, trying to explain vegetarianism to my Cypriot family. And I still ate fish.]

Out of Sorts is issue-led, but only by being character-led. With Zara as her pivot, Samal studies a series of dualities, or rather the nuances chain-webbed across seemingly opposite positions, each complexity playing out within a particular relationship. Through the chalk and cheese of Zara and Alice, Samal thinks about privilege: Alice has financial privilege, white privilege, a family who buy her a flat and expensive gifts – each one at the expense of tenderness. That unconditional love Alice envies, however, is as much burden to Zara as gift: felt as a kind of oppression, a smothering. Zara and Alice’s Nigerian-Brummie boyfriend Anthony are a study of assumption and adaptation: she thinks he’s Caribbean because he makes jerk chicken, he thinks she’s Syrian and has been manoeuvred into an arranged marriage. But Anthony is more perceptive than this implies: he sees the fault-line of self-hate that splits Zara in two, and has a poise and self-possession she painfully lacks.

Zara and her father Hussein confront each other with pride: his in withstanding every challenge British society throws at him – every challenge, that is, except the temptation of Custard Creams; hers in silently supporting her family financially, even when she can’t quite afford it. Zara and her mother Layla are images of illness, one mental, one physical, equally hidden. Layla is exquisitely played by Myriam Acharki: her body taut as a harp string from carrying the pain that she insists is outside, separate to her, over there in another part of the room. As Zara, NalÃ¢n Burgess slowly crumbles, her facade disintegrating as the means she has found to control her self-image are revealed.

[The next day, confused. Because the schism hasn’t mended really. It deepens, creates a dissonance, like static, buzzing across the mind late at night, the rupturing question of how all this came to be. Who are you? Why are you? What makes this fair? It’s not that I recognise myself on stage exactly, more that shards of detail in Zara’s story fit into the jigsaw of my family life. The way my dad calls my mum yinaika, a Greek word of double meaning, woman and wife, just like Hussein. The way Fatima, Zara’s pithy sister, is full of bright entrepreneurial ideas but lives disgruntled in her sibling’s shadow.]

Other reviewers have complained that there’s a bit too much going on in Out of Sorts but the messiness it has is the messy of life. Late last year I interviewed Ella Hickson about the well-made play and and loved her argument that “form is related to cultural structures: how we tell stories is how we organise societies to a certain extent”. The kitchen-sink dramas that erupted on to the British stage in the 1950s and 60s were an attempt to disrupt class structures by conferring the status of protagonist on to working-class people usually seen as servants, stereotypes, bit-parts. That’s the form that Samal turns to, Tanuja too. In another blog post, Tanuja described herself as “interested in making productions that feel like they come from the modern world rather than some arcane notion of theatre tied to traditional conventions”. There’s a roughness to this production: in the way Claudius Peters, as Anthony, murmurs sometimes, barely audible; especially in the way Nayef Rashed’s Hussein falters over his lines, because the script – governed by his Anglicised daughter – is forcing him to speak English. But again, it’s a roughness of life: familiar, homely, and true.

[Earlier on the day I saw Out of Sorts, I interviewed someone who, having listened to me explain what I hoped we might talk about, said cheerfully: “That’s all a bit intellectual for me.” I thought about my mum, how once upon a time she told me how clear my writing is, and easy to understand, not like a lot of what gets published in the newspaper. The line perpetually skated: between wanting to be smart and wanting to connect.]

Most of the people I interviewed for that well-made play piece felt that kitchen-sink naturalism is more suited to TV and cinema. My friend Samantha Ellis, a sometimes playwright of Iraqi-Jewish heritage – arguably also the wrong kind of ethnic for this industry – disagreed. “I hate the idea that plays can only be subversive by transgressing form,” she wrote on Twitter,“Showing a character transgressing can still be dynamite. Some of us still have social codes to fight & want to see that struggle represented.”

The struggle against social codes is as much Layla’s as Zara’s: briefly, tenderly, Samal hints at how the attempt to grow up, be independent, wriggle free of parental expectation is generational. Layla went through it years before Zara was born, admits that she “travel[led] to the other side of the world to escape my mother”. It’s one of a few electric moments in which Samal rips away audience assumptions about who these immigrant people are. In another, Zara breezily calls her mother a refugee, only to be told crisply: “I am not refugee any more. I am British citizen now.”

Looking up the word haram online – a word Alice and Zara bandy between them any time Zara drinks or expresses anything forbidden by the Qu’ran – I begin to wonder at the multiple meanings Samal might have tucked into that too. It’s a word used for teasing, but also for sympathy: god have pity, what a shame.

[Shame is the key note that buzzes deep inside. Recognition of a shame that curdles into guilt. Not for who they are but for yourself: for never being put to the test like they were, never having to struggle, having everything handed to you on a plate, like a platter of perfectly seasoned barbecued meats, and how inconsiderate it is – how privileged, even – to reject that.]

I’ve been meaning to write for a while now about the plays made by brown and black people (and I’m being specific rather than using the acronym BAME after reading this useful thread by Tobi Kyeremateng) that are not “for” me, but that tell a story I know in my bones. Seeing my white Cypriot aunties and uncles fight it out over the course of Natasha Gordon’s Nine Night. Seeing my dad’s homelessness, and my mother not wanting to return to the motherland, in grains of Selina Thompson’s Salt. Out of Sorts is another such story, not representing me, but representative, universal, and I want to say that I’m grateful for it.

Out of Sorts is on at Theatre 503 till 2nd November. More info here.

Maddy Costa is a writer, dramaturg, researcher into socially engaged/participatory/community arts, daydreamer and fan of dogs. She works in collaboration with other artists/writers, including Andy Field on the Tiny Letter project Criticism and Love, and Mary Paterson and Diana Damian Martin on Something Other and The Department of Feminist Conversations. Things she likes making include zines, prints, spaces for conversation, cakes and 1950s-style frocks. She hosts a pop-up â€œbook group for performanceâ€ called Theatre Club where she has all her best conversations about theatre.

Review: Out of Sorts at Theatre 503 Show Info