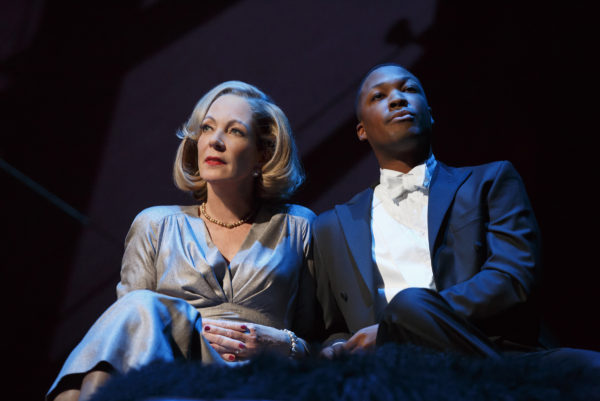 John Guare’s play Six Degrees of Separation is a dissertation on storytelling. I didn’t realize that until I saw the revival presently being staged at the Barrymore Theater. I had read the play a few years after it’s original 1990 Broadway run and I saw the film adaptation in 1993. But in the years since, I have become a storyteller myself, and have spent countless evenings at open mics and curated showcases listening to polished autobiographical tales. With that context, it illuminated for me the play’s core theme: there is such complexity in the stories we tell, to others, about ourselves.

Set in 1990, the majority of the action takes place in the Upper East Side Manhattan apartment of art dealer Flan Kittredge (John Benjamin Hickey) and his wife Ouisa (Allison Janney). They are trying to charm a two-million-dollar investment out of a friend visiting from South Africa by hosting him in their home. Their doorbell interrupts. Enter Paul (Corey Hawkins), a young man claiming to have been mugged and stabbed on the street. He tells Flan and Ouisa that he goes to college with their children and that’s how he knew their apartment would be a safe place to go for help. They welcome him in and their evening is transformed.

Paul not only cooks up a delicious dinner for everyone, he also serves a series of stories about life as the son of famous actor and activist Sidney Poitier. He displays boundless enthusiasm and curiosity as he explains the thesis he’s working on about The Catcher In the Rye.

As the play proceeds we learn Paul is not all that he claims to be and therefore the Kittredges don’t know him as well as they thought. Although, they may not know their children, their friends, or each other that well either. It’s hard to blame them for being fooled. The charismatic Paul displays intelligence and the kind of luminous energy reserved for young people with seemingly great futures ahead of them. Plus, to return to my earlier point, he’s a helluva storyteller.

So much of Six Degrees of Separation is characters telling other people about something that happened to them. Some of the play’s stories are true, others are fabricated. Well, everything is fabricated. It’s a work of fiction after all. Although, it was inspired by a true story, as told to playwright John Guare by friends of his as something that happened to them one night. The complexities of truth, the blurry line between truth and fiction is another recurring theme in the show. One character reminds us repeatedly that there are two sides to every story, just as there are two sides to the Kandinsky hovering over the stage, displayed in the Kittredge’s apartment, a sign of their worth, their position, their status.

The struggle, as expressed by Ouisa in Allison Janney’s strongest moment, is maintaining authenticity in the retelling of our rich human experiences, instead of letting them devolve into rote party anecdotes. What was it about Paul’s stories that kept everyone so entranced? Are they just “star fuckers” as Ouisa warns? Does one degree of connection between them and a civil rights icon strum the right chords on their white liberal guilt? Or was the connection to this young man real even if his stories were not? If so, how do they hold on to that experience?

Through Janney’s emotional climax you sense Ouisa’s legitimate exasperation at her husband, their routines, and how easily those life experiences slip from her embrace only to be repackaged for the consumption of their friends. It’s disappointing that there were not more hints of Ouisa’s potential depth throughout. Janney certainly has the chops to deliver them based on her body of work on stage, in film, and on TV.

Ouisa is warm to Paul, but by the show’s end his impact is on her more than anyone. She goes through a transformation in the text, but on the stage it all came across a bit sudden. Janney performs much of the show as Flan’s comedic partner which chafes against Ouisa’s potential for introspection.  I wish Janney and director Trip Cullman had found ways to slowly craft and build her growth.  We needed to feel it throughout her performance, not just understand it in the final analysis at the play’s close.

Corey Hawkins is a standout. The passionate brio he brings to Paul is joined with vulnerability and a sharp skill at a variety of seduction styles. Even when certain autobiographical details prove false, Hawkins’ performance encourages you to bestow not just the benefit of your doubts on Paul, but a wistful pining for what might have been. What if he was the son of Sidney Poitier? What if he had different chances in life? Was he as insightful as he seemed or was he simply a great performer? Perhaps there are two sides to that story, too.

The play was funnier than I remember it being, even lighter. Particularly, the various actors who play the disgruntled Gen X children of the Kittredges and their friends who collectively made for a comedic device in Trip Cullman’s staging. The contempt with which they see their parents is not hidden, often not unwarranted, and they deliver their fury in a playful, funny, melodious style.

The scenic and lighting design teams seamlessly guide us through various times and locations without disrupting the flow of the piece. It is a taut production by Cullman, with a breathless pace to boot. But it could have afforded a few more measured moments to let an idea or a line of dialogue marinate. Perhaps Ouisa’s arc of self-reflection would not have felt so jarring if we weren’t rushing to get there.