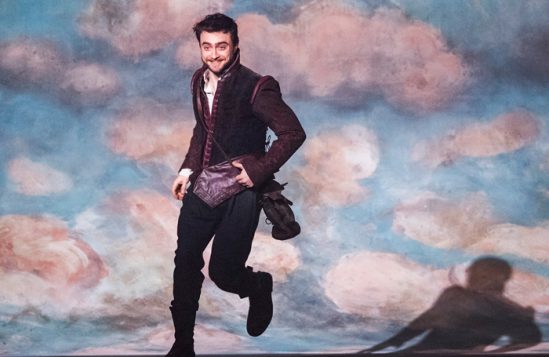 “Aww, Harry Potter!” squealed a voice in the audience when, towards the end of Rosencrantz & Guildenstern Are Dead, Daniel Radcliffe as Rosencrantz collapsed forlornly down with his head in his hands.

It was an appropriate addition to a play in which different pieces of fiction swirl together like coloured ink in water and roles played become, ultimately, inescapable. Try as he might with the serious performances in Shaffer and Stoppard, Radcliffe is nonetheless destined to be trapped in the role of schoolboy wizard. It’s not something he can control. The Potter/Radcliffe hybrid exists in other people’s minds. If he walked out of The Old Vic tomorrow and mistimed those confusing traffic lights, some berk somewhere would write: Harry Potter is dead.

David Leveaux’s 50th anniversary production of Stoppard’s play places emphasis on the metatheatrical elements of the work. Along with the overarching questions about free will and fate, there are also consistent nods to the act of performing this play about performing. Radcliffe and Joshua McGuire (Guildenstern) speak many of the lines from the very front of the stage, sort of half in the on-stage world and half in the audience’s one. Whilst they poke out into the auditorium, Anna Fleischle’s set design drags the Old Vic interior back into the furthest depths of the stage. Daliesque clouds rolling away into the distance mix in with the mermaid-coloured paintwork of the theatre making the expanse of sky stretch both forwards and back, like the distortion of time that occurs when Harry Potter is Daniel Radcliffe is Rosencrantz. It’s like a much sillier version of T. S. Eliot.

Fleischle’s clouds are particularly suited to the first half of the play when the two friends do their best Godot act, flipping coins and watching, waiting, willing something to happen. The humour is sprinkled lightly and pleasantly, and I sit watching in the same way one would sit watching puffy clouds turn into bear shapes on a Sunday by the weir in Bath. My slightly patronising indulgence of the piece – imagining I might get to use the word ‘chucklesome’ in the review – is revealed to be badly ill-judged. Even by the first interval, let alone the final curtain, the play has morphed into better reflecting the feeling that comes with watching the clouds mutate and being desperately aware of an inability to exert any control over their next move. Turning them into imaginary grizzlies is one thing; watching as they dump icy water on you is another.

The other thing that I was wrong about is Radcliffe himself. The cynic in me had said: well that will sell the tickets (not that The Old Vic had trouble doing so). But Radcliffe is in fact very well cast in the role of the lovable doofus, exercising a calming effect on McGuire’s more antagonised Guildenstern. Possibly the most enjoyable moment of the night occurs when Rosencrantz deliberately lets his friend win a collection of coins in quick succession. Guildenstern finds out and is angry. “I just wanted to make you happy,” pipes up Rosencrantz with a dorky grin on his face, to which pretty much the entire auditorium responds with a collective ‘Aaahhhh!’

The other hugely enjoyable performance comes from David Haig as The Player. Dressed in a jacket discarded last decade from Pete Doherty, he roams around the stage like a ghost at a crossroads on the Somerset Levels. There’s a bit of the Jack Sparrow madman in the performance, but as with the rest of the play there’s also a more melancholic, or certainly slower-paced, streak present as well.

It’s this confusion of tone that provides the most interest. In one respect it’s an enjoyable bumble through spoonerisms and easy gags such as “eternity, that’s a terrifying thought. I mean, where’s it going to end?” And if you like that kind of humour, then it would be possible to watch and enjoy in just this regard. Yet it is also a play that whisks you down wormholes if you wish to fall down them. At the very beginning a slinky white curtain falls from the ceiling and is swooshed into the wings like a magician’s hanky. Illusions, like the expansive sky, are created but also smashed. At the end, another curtain descends, but this time with the wire attached to it clearly visible. Theatre is both magical and fake.

Being Harry Potter has served Radcliffe well. At the end of the performance, he not only gets whoops of “I love you, Daniel!” from the school group in the Dress Circle but also roses thrown at his feet by two girls in the front row. Like Rosencrantz and Guildenstern, we’re all to a degree stuck on boats heading uninterrupted towards a fixed destination. But if you’re going to be trapped, then a trap made from floral tributes and declarations of love seems like a better one than most.

Rosencrantz & Guildenstern Are Dead is on at The Old Vic until 29th April 2017. Click here for more details.