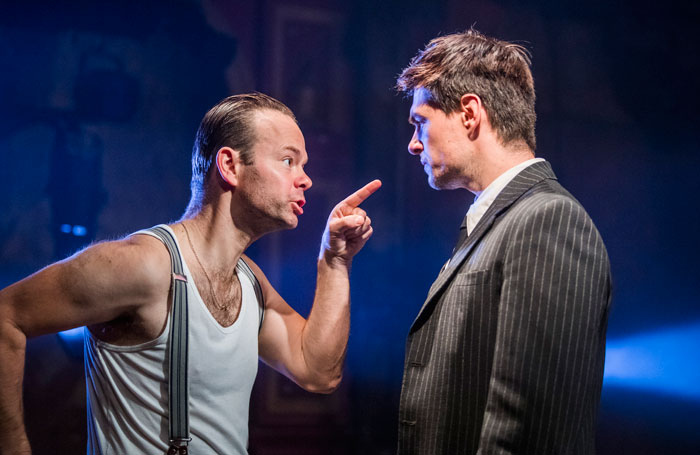 I won’t try to delve into the philosophy of Albert Camus’s 1942 novel about a man who believes nothing in life has any meaning, because I definitely have no observations to make that loads of brilliant literary critics and philosophers haven’t already. But I will say it’s pretty interesting: certainly enough to make it worth getting along to this, the first major UK stage production of the work, in an adaptation by Booker Prize winner Ben Okri.

It’s about the young-ish Meursault – played by Sam Frenchum – a white Frenchman in Algiers, colonial Algeria, in the early twentieth century. At the start of the story, related in part to us through Meursault’s utilitarian narration, he is informed that his mother has died; he betrays little emotion, either upon hearing the news, or at the funeral. He starts seeing Marie (Vera Chok), a woman from his work: though he appreciates her body, he develops no strong feelings, and dismisses her suggestions of getting married.

Meursault introduces us to some his neighbours, with complete detachment from the minor miseries of their lives. He listens uncuriously as one, Raymond (Sam Alexander), details with relish the horrific acts of domestic violence he has committed against his apparently unfaithful mistress (and those he’d like to).

Next it emerges that Raymond has angered the Arab brother of his mistress. There are a few tense stand-offs between the two groups, before eventually Meursault finds himself at the beach, alone, in the blazing heat of the sun, with a gun, staring down the brother. And, with a baffling explanation for his actions, he shoots the man five times. In the second half, we find Meursault in a cell, waiting to stand trial for murder.

The reputation of the novel might come from its philosophical themes, but where this production, directed with lots of inspiration by Abbey Wright, comes into its own, is in its visceral moments of theatricality. We see a row of mourners at Meursault’s mother’s funeral breaking out into a mass fit of contagious coughing; in another moment the pallbearers carrying her coffin freeze, mid-step, like a video being paused. Later, there’s a strange thrill in listening to an old woman in a restaurant, whose obsessive planning of her life is described in amusing detail by Meursault, loudly slurping her soup.

Meursault might not believe that anything has any meaning, but he is still an animal who finds pleasure in those needs near the bottom of Maslow’s hierarchy: food, sex, and initially, smoking. There are real fags aplenty smoked on stage, though once Meursault is in prison and has no access to them, he loses the urge and accepts this with little comment, since like everything else, it means nothing to him. But it’s food that offers the highlight of the play, when he fries an egg on stage on a little stove, pondering and poking at it. He puts a bit in his mouth; it’s too hot. He finishes the egg especially inelegantly. The whole thing is enthralling.

Frenchum is hugely enjoyable in a part that is a massive ask for an actor, since it effectively has no relatable emotional states. His demi-frown – a mix of puzzlement, mild concern and detachment – stays fixed almost throughout. But when he’s called on to deliver some emotion, as Meursault’s gloomy fate draws close, he delivers. The rest of the 13-strong cast is good too, creating a sense of a plausible social backdrop with bright splashes of caricature. At 2 hours 45 minutes, including interval, it’s a touch on the long side – but Okri’s text allows for something remarkably accessible, given the demanding source material.

The Outsider is on at the Print Room until 20th October. More info here.

Simon Gwynn is a contributor to Exeunt Magazine

Written by Adapted for the stage by Ben Okri from the novel in French by Albert Camus, based on the original English translation by Matthew Ward