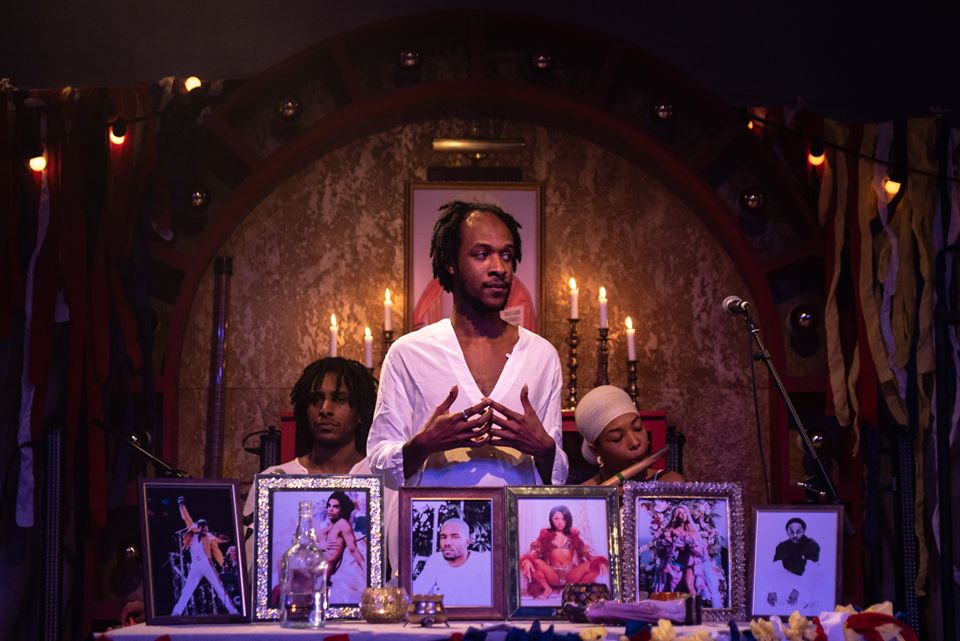 The air is thick with incense and there’s a heady atmosphere in the room. Pariss Elektra and Azizi Cole sing against the gentle patter of a rainstick. We wash our hands with a drop of water as we go in. A ritual has begun.

Jamal Gerald’s Idol weaves together a number of issues around Black identity through an autobiographical lens, beginning with his Catholic upbringing. A growing feeling of distance between himself and the white Jesus he’s supposed to pray to, as well as his coming into his identity as a queer man makes him distance himself from Catholicism. Sinning felt good, Gerald says, and I’m reminded of a line from Jia Tolentino’s essay on ecstasy (both the drug and the religious kind): ‘It’s hard to draw the line between taking pleasure in God’s purpose and aligning God’s purpose with what I take pleasure in’.

But a desire for spirituality, for devotion remains, and Gerald finds it in his own Black idols of pop culture – Prince, Lil’ Kim, BeyoncÃ©. But these idols are still light-skinned enough to be allowed to the play the game of mainstream popular culture. The thorniest parts of the show are when Gerald turns his attention to internalised anti-Blackness; he talks about not being seen or appreciated by other queer Black men who instead idolise and seek validation from white men, and the need to unlearn and reject white supremacy.

Gerald’s text is clear, precise, engaging. But it’s the non-verbal sequences that I find the most expressive, whether it’s bathing himself in scented water or moving to Electra and Cole’s music. And the way he moves! Lithe, flowing, never jagged, simultaneously within and outside himself. It’s in these moments that Gerald enacts the contentedness and spiritual affirmation that he searches for in the text – what Tolentino describes as ‘an extrahuman world of rapture and pardon.’ The place you’re so yourself that you can forget yourself.

For Gerald, that’s the time he spent Trinidad, which he recounts towards the end of the show. Gerald finds affirmation from a hookup with a Black man who values him and his Blackness. He learns about Orisha gods and sees himself reflected in the world of spirituality for the first time. When he explains that he has funded this trip with white institutions’ money, people congratulate him. Take the money and run.

On the subject of white institutions: I notice that the night I see the show, there’s a feeling of it being slightly dampened – its jokes not quite crackling, its moments of joy stopping short of fully blooming. The applause is full and appreciative, but I find this surprising given the flatness I’ve just felt in the room. It’s no small coincidence that only a small handful of people in the audience are Black. The next day, Gerald shares a blog post on his website titled ‘White Audiences.’ He talks about his frustration towards uninterested white audience members (to whom the work is not concerned with speaking in the first place) refusing to listen or give back to what he’s sharing on stage – even rolling their eyes and falling asleep.

It might have been a anomalously bad night for this, but I mention it because, while received wisdom says that critics aren’t supposed to review audiences, performances don’t exist in aesthetic vacuums. They’re social events which always incur dialogue, whether that’s verbal or otherwise. That’s the ritual that Idol sets up, but despite the incense and music, the conditions on this night aren’t right for the ritual to fully succeed. As Gerald says, we talk a lot about better representation onstage, but what about in audiences? This very work is about the search for affirmation through representation – being seen – and it works both ways: audiences need to see themselves represented onstage, and makers need to see themselves represented in their audiences. It should go without saying, of course, that the work to bring those audiences to the theatre must lie primarily with institutions, not artists.

In Greek mythology, Arethusa bathes in a stream, not knowing that the stream is, in fact, the river god Alpheus. Alpheus ‘falls in love,’ but, determined to remain chaste, Arethusa flees. Following an exhausting chase, she persuades the goddess Diana to turn her into water so that she might escape, and she flows through the sea and into the springs of the island of Ortygia.

Edythe E Woolley’s Sensitive Plumbing is a queering of this myth, in which water spells freedom from the male gaze. The three female performers, dressed in swimming suits and trainers and tied to each other with plastic tubing, wrangle each other into various semi-suggestive poses, turning to meet the audience’s gaze with each image. It’s a deadpan stare, challenging but aloof: ‘Yeah, and?’ it seems to say.

Later, in a chaotic dance of vigorous masturbatory movements, Woolley tempers the pornographic with the absurd. Water makes everything clumsier, sillier, splashier. They poke and prod at plastic bags of dark brown water, hung up like teats and testicles, mediated through the kind of low-res, flash-illuminated video feed that recalls lewd videotapes in the shadowier corners of the internet. It’s a kind of water-park pretend-play at filthiness. Like Arethusa swimming to freedom, it’s via water that the performers escape any involuntary entrapment by a girl-on-girl pornographic lens.

And there’s a LOT of water in the performance. It’s pumped through tubes into amplified buckets or siphoned in the way you’d drain a car engine of gasoline, or passed from mouth to mouth like a Love Island challenge. As the performers arrange themselves in a fountain-statue formation around a tarpaulin pool, water moves around and between their bodies. It unites them, flowing and mingling like currents in a river. It’s ingested and expelled, it’s bodily fluid (bodies sure contain lots of sensitive plumbing). This water is not just water, but also sweat, saliva, vaginal discharge, amniotic fluid.

Some of it is coloured a nasty sewage-brown. It bubbles up like a geyser from a faulty toilet. It’s frequently spilled, and pools dangerously close to lights and cables. But as the performance space becomes messier and wetter, strewn with soggy foam, sodden toilet roll and smashed up MDF, there’s something freeing about danger and contamination. The performance soils itself, then rolls around in the juice like it just don’t care. In this way it follows in the lineage of queer performance which locates its politics in the aesthetics of excess and abjection. It’s too much, spilling over and out of itself, defying the boundaries of skin, enacting solidarity instead.

NOW Festival week 4 ran at The Yard from 11-15 February. Idol tours the UK until 23rd May. More info here.