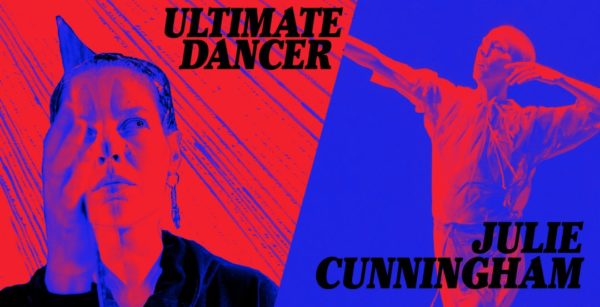 Ultimate Dancer and Julie Cunningham at the Yard.

Forests are burning, the world is on fire, and we’re sitting in a theatre as if none of this matters.

The red cords strung across the stage might be a cat’s cradle stretching the hands of a child. Julie Cunningham’s body ducks and weaves between and through the lines, struts and pecks beneath and over them, stretches and tugs the length of them. Decorating the edges of Cunningham’s body are flame-red feathery tufts; the music propelling their movements is Stravinsky’s score for The Firebird: a fairy tale creature that glows with its own unquenchable light. Suddenly a projected image appears on the back wall, of artist/musician JD Samson (beloved third of Le Tigre), eating an apple and mutter-murmuring along with the melody. The playfulness is exquisite.

Or the red cords might be a snare. Arms drawn back, shoulder blades scrunched, Cunningham bats truncated wings, effective as a chicken’s. Curling their arms to the front of their body they scrub at their breasts, perhaps to grow them, perhaps to erase them. Now and then their body snags, caught in the web of the cords, searching for how to break free. But they do and their body looms larger and larger, seizing power from the music, from the promise of the other firebird: the phoenix who is perpetually reborn from the embers of its own flames.

Or the red cords might be blood lines, connecting story and thought and art across time. Connecting modernism (then) with modern resistance (now), connecting the original bold ambition of Diaghilev’s Ballet Russes with today’s dance artists attempting to disrupt the comfortable, conservative, traditional spaces in which The Firebird might be too easily caged, connecting the rejection of tutu and bun in 1910 with Cunningham’s refusal to pander to gendered conventions.

“Gender is a social construct. It doesn’t exist – it’s just a box. The body is unstable, constantly changing. This is me today.”

Forests are burning, the world is on fire, and we’re sitting in a theatre because these things matter.

Stage left, a sheet dyed in lurid reds, oranges, browns: a Rorschach pattern that might be a firebird, or a devil, or a vulva (the building blocks of the spiritual world). Stage right, Ahl’s body split and remade by a square of polished mirror-sheen metal that slices them through the middle; wearing a black hoodie, strung with chain and keys, they look a little like a medieval monk, a little like ET out on an escapade: a timeless androgynous creature who speaks in the riddles of the Sphinx. “That which is solid will melt in your brain”; “You will find the answer by learning that the square is a circle in the shape of a triangle in the shape of a square”; “If you die in the forest without making a sound and no one is there to say goodbye, are you still alive?”

Like the Sphinx too their body is a thing against nature, folding beside and merging with the mirror-metal to transform fluidly from one misshapen creature to another. Legs stretch and torso disappears to become an eight-limbed headless beast; fingers double and flex as a wriggly termite. The metal is discarded in a storm rattle and Ahl moves across the back wall, holding awkward poses like the two-dimensional figures that decorate ancient Greek vases, or like the jolt-jerk dancers in crackling early film of Diaghilev performances. (The music is Debussy’s PrÃ©lude Ã  l’aprÃ¨s-midi d’un faune, choreographed by Nijinsky in 1912, which might have inspired Ahl’s movement here.) Presiding over this scene of ineffable mystery is another string of chain mail that hovers in shadow on the back wall, a gossamer ghost witch, casting silent spell.

Forests are burning, the world is on fire, and we’re sitting in a theatre transforming matter.

Human to animal, gender to myth, sprite to metal, image to truth, history to pulse, music to movement, despair to possibility.

There’s a version of the Firebird folk tale – not the one used by Diaghilev – in which the creature is just a regular bird that flies around giving hope to those who need it.

Lite Metle and fire bird are at the Yard Theatre till 1st February, as part of NOW 20. More info here.

Maddy Costa is a writer, dramaturg, researcher into socially engaged/participatory/community arts, daydreamer and fan of dogs. She works in collaboration with other artists/writers, including Andy Field on the Tiny Letter project Criticism and Love, and Mary Paterson and Diana Damian Martin on Something Other and The Department of Feminist Conversations. Things she likes making include zines, prints, spaces for conversation, cakes and 1950s-style frocks. She hosts a pop-up â€œbook group for performanceâ€ called Theatre Club where she has all her best conversations about theatre.