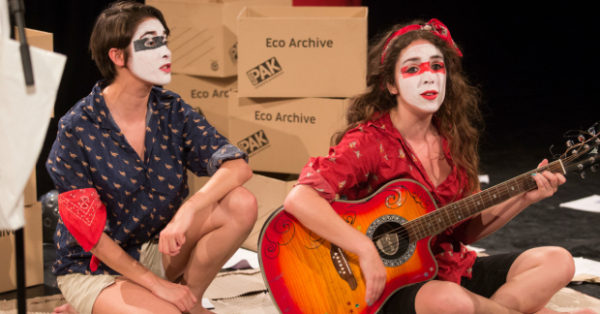 Sh!t Theatre’s 2015 Edinburgh show, Women’s Hour was bold, emotional, riotous and, crucially, ridiculously funny. It was very good. Arguably one of the sleeper hits of last year’s Fringe, it put a deservedly bright spotlight on this exciting young company. But could they do it again? The answer is a resounding yes. Letters to Windsor House is an exceptional piece of theatre that doesn’t just match the quality of its predecessor; it surpasses it in both quality and content.

London’s housing crisis is on the agenda this time round, another deeply personal topic for best friends and long-term housemates Rebecca Biscuit and Louise Mothersole. In making the decision to open the mail of previous tenants, they open a can of worms that puts their own tenancy and friendship into question.

Many of the techniques that made Women’s Hour so interesting are brought back here again, and used just as well. Moments of genuine emotion and dramatic impact are quickly juxtaposed with hilarious songs and surreal dance routines. Letters they read out to one another are, at times, brutally heartbreaking – but they’re dressed as red post boxes while they’re doing so. It’s that clash of the real and the absurd that they pull off so well, it’s impossible not to adore them.

Everything rests on the chemistry between the two performers and, unsurprisingly, Biscuit and Mothersole are great together. The show is about the absurdity of the housing crisis, yes, but it as much a reminder that those living within it are, in fact, people with real lives and real problems. Whether it’s the former tenants that our intrepid heroes are trying to track down, or their own issues, it gives humanity to a problem that is becoming so far removed from it.

Those who haven’t lived in London for a significant period of time may not fully connect with everything in the show, but there is enough factual evidence (and cutting satire) to keep them engaged. For those who have lived there (including this reviewer, who lived ten minutes away from the housing estate in question), an extra layer of melancholy and frustration hangs over this smartly produced show. Their tenancy might be under threat. But with Letters to Windsor House, Sh!t Theatre have proven that they’re here to stay.

Jafar Iqbal is a contributor to Exeunt Magazine