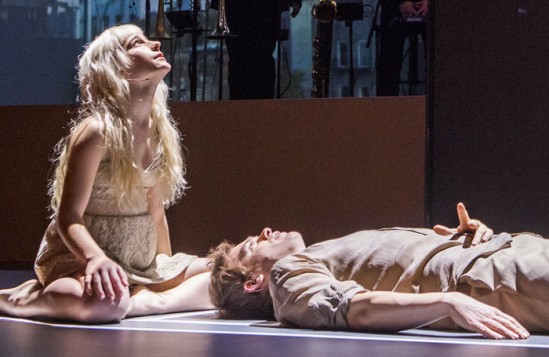 David Bowie wrote a musical. As he died from liver cancer, he ensured that we would never have to see a jukebox musical in the vein of We Will Rock You or Thriller. We’d never have to see, I don’t know, a show called HEROES about an astronaut, Major Tom, transporting his wife Jean’s ashes to Mars and encountering a companionable singing Starman along the way. Book by, I don’t know, Michael Ball, with John Barrowman playing Major Tom. Additional songs by Stiles and Drewe. We are spared. Bowie did it on his own terms.

Loosely, it’s a sequel to The Man Who Fell To Earth, and expands the life of Thomas Newton, that strange pale alien Bowie played in the Nicolas Roeg film adapted from Walter Tevis’s novel. Newton (a grey, despairing Michael C Hall, whose singing voice is eerily similar to Bowie’s) rots away in his hotel room drinking gin, grieving for a lover who died, cared for by both an imaginary woman (Sophia Anne Caruso) and a real woman (the rightly ascendant Amy Lennox). He wants to build a rocket to take him back home. Meanwhile a Luciferous mass murderer (Michael Esper – seemingly everyone is called Michael, even one of the characters) is on the hunt for Newton.

It’s more than just moments that rankle in this whispering, gesturing abstraction of a musical. Large chunks hang cryptically in the air and, in the effort to decipher what’s just happened and absorb what’s currently happening, decipher and absorb, decipher and absorb, the heresy starts to niggle that maybe there’s no code to crack. Because a lot of David Bowie’s songs don’t really make sense, do they?

That isn’t a bad thing though. How many musicals waft symbols and moods and atmospheres towards their audience, how many leave the slate partially blank and allow audience members to fill in their own meanings? We’re so used to roof-raising hammer blows of emotion and hardcore schmaltz to tell us exactly how a character is feeling about only having half a face/being a cat/the French Revolution – even in jukebox musicals, where the lyrics are mostly left as is despite the context they’ve been wedged into, there’s still a big solo number, a big act one finale etc. Lazarus eschews those musical theatre conventions even though, actually, that’s exactly what the show is: a jukebox musical for people concerned about what others think of their taste in music. A jukebox musical populated with several songs plucked from obscurity, rather than the string of hits that Mamma Mia and We Will Rock You and the others plump for. The respectable face of jukebox.

That’s not quite fair. A lot of the hits are there: Changes (in a swung version like a 70s sitcom theme), Life On Mars (in a drawling Noo Yoik accent), The Man Who Sold The World (rifless, backed with astral synths), All The Young Dudes, Heroes. Not a bad haul. But there are also a couple of those skippable songs that fester at the end of Best of Bowie Disc 2 (This Is Not America). Some of those songs are given ethereal and aharmonious covers. Best of all are the newer songs like Dirty Boys from The Next Day, with its filthy, stomping brass and sax, and the titular Lazarus making quite an opening number as Michael C Hall sings, to his reverent audience, ‘look up here, I’m in heaven’.

Playwright supreme Enda Walsh, it’s clear, was the perfect choice for collaboration. Like Bowie’s music, his plays revel in playful, poetic acts of suggestion. Individual lines make sense on their own terms, as Walsh’s often hermetic characters devise and live by the internal logic of their own little worlds. But the whole is always something to be reckoned and wrestled with. We’re in some kind of hotel room in which everything, from carpet to curtains, is, as Anita Brookner once put it, the colour of overcooked veal. At first uncluttered, it gradually accrues piles of clothes and empty glasses and smears of blood.

In direction (Ivo van Hove) and design (Jan Versweyveld) there seems to be some statement about the relativity of media and the fictions represented in different media. A big square screen sits centre stage, with a glass-fronted mezzanine behind running the full length of the stage where the band perch. The screen, which shows successions of strange images as well as slightly out-of-sync filmed recordings of the actors on stage, occasionally escapes its confines, spilling its projection mapped animations onto the rest of the stage. The video design is pretty sublime. In one scene a projection mapped Newton breaks out of the screen and moves across the stage, pulling clothes out of drawers and ripping down curtains, while the actual curtains remain hanging and the actual clothes lie folded. This faint palimpsest traced over reality looks spectacular, and probably means something too.

Don’t really know what. I’d 100% go and watch it again, though, just to savour that mood, that combination of empyrean expanse and khaki claustrophrobia, of being startled and challenged and asked to think, soaking up all that joylessness. A plot emerges; it doesn’t matter. In the end the musical is about fame, and it is about changes, and it is about sound & vision and alien life and people dying and rising from the dead, and telephones, opera house, favorite melodies, and boys, toys, electric irons and TVs. And those laden, dripping symbols that fill all of Bowie’s best songs find their points of correspondence in the Tevis/Walsh narrative and the van Hove direction. In these great big metaphors tenor and vehicle are interchangeable. Earlier ranklings prove insubstantial. It’s the freakiest show.

Lazarus is on at the King’s Cross Theatre until 22nd January 2017. Click here for more details.