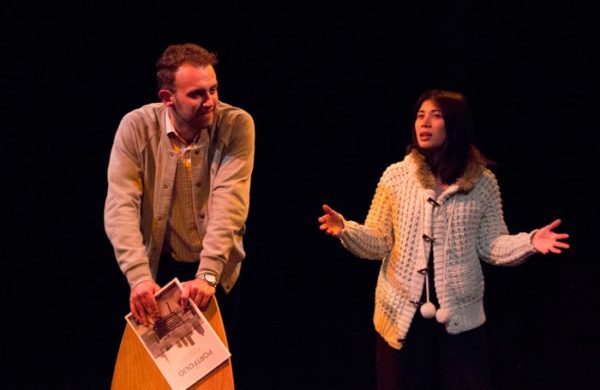 In London, one of the most expensive cities in the world, the housing market is booming – a greedy monster that feeds on foreign investment like a child in a sweet shop. Seemingly innocuous plots of wasteland are being sold for billions of pounds to Russian oligarchs, Middle Eastern oil sheikhs and Chinese business moguls. It is estimated that the latter will have paid in over £105 billion to the British economy by 2025 – small wonder, then, that property developers are actively seeking Chinese investment.

But is it right that they are being granted accelerated Tier 1 visas to bulk buy housing as if it were on wholesale, only to let it sit there empty and unused? Space in London has clearly been at a premium for decades, but the gap between these billionaires and the plethora of first time buyers has never been greater. Jingan Young writes I’m Just Here To Buy Soy Sauce as a commentary on the housing crisis and the economic gap. Two intertwining stories are presented: a 20-something couple whose attempt to buy their first flat has left the relationship in tatters vs. a pair of estate agents actively seeking Chinese cash buyers for their billion pound development aptly titled ‘Western Gateway.’

Young’s script works by contrasting these two ends of the spectrum; in one scenario property is a commodity, an asset in high demand that can be sold at a premium to simultaneously help non-nationals expand their global portfolio and line the pockets of those that are hungry to gain top commission themselves. It is this version of events that Cassandra (Joyce Veheary) and Freddie (Alexander Wilson) find themselves in. Cassandra is a senior associate at a company established purely to encourage Chinese investment and Freddie is the new junior associate who tells himself that it’s just a job to put food on the table. This story is the more powerful of the two, a controversial take on the Londoners who actively seek out the immediately identifiable evil in this particular plot. Freyja Winterson’s direction encourages contrast between the protagonists as they jostle for position, the resulting power dynamic slowly shifting over from teacher to student. Yet despite their seemingly sinister motives, Young convinces the audience to empathise with these characters. Any city worker can put themselves in their shoes, doing what they have to do to get by in an ever more expensive environment.

As their stories progress, Cassandra (Veheary) is toned down after an initially over the top and shrill start. Veheary manages to convey the humanity in the character, the person behind the cold, corporate faÃ§ade. Wilson’s complementary performance sees his more genuine, emotive side slowly be subsumed by his inner greed. As one falls, the other is poised and ready to take over.

The other scenario in Young’s play portrays property as a home, a place where you escape the daily grind, a sanctuary in which to let down your guard. Unfortunately the dream isn’t always easily achievable, as Charmaine (Veheary) and Fraser (Wilson) discover when the desire to cohabitate ultimately destroys their relationship. This particular storyline is found wanting in comparison with its more controversial alternative. The characters, whilst relatable, aren’t enticing and the plot itself is fairly stagnant. This couple are more likely to resemble the production’s audience than the others and as such are more open to scrutiny. A broken dream; a broken romance, both of these should provide ample material for some impactful dialogue, yet in its current state, the concept is yet to leave an impression and only serves to dilute the overall message.

Owning a home, be it a flat, penthouse apartment or Georgian townhouse, seems to be the new milestone by which London inhabitants measure their success. It has quickly become the ultimate of life’s expectations, even superseding the older romantic notions of a partner, a marriage and a couple of kids. In a city of ~9 million, all of whom have that same life goal of commercial success, outside investment is generally seen as a negative, further reducing the property pool in an already saturated market. Especially since these obscenely wealthy individuals are just passing through, present but inactive, only here to buy soy sauce. Young’s play comments on a poignant topic, but needs more flavour to truly pack a punch. The subject matter is itself one laced with controversy, so the overall production can afford to take more risks.