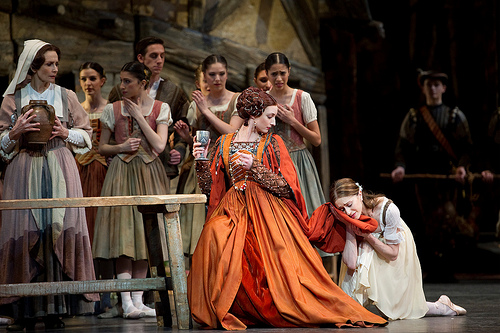 Giselle at the Royal Opera House.

The Royal Ballet’s Giselle reveals the company at its very best. Peter Wright’s production is supremely dramatic, brilliantly danced and highlights the perennial truth that your mama is always right about dubious men. Of course, there are magnetic principal performances by Marianela NuÃ±ez and Vadim Muntagirov as the doomed Giselle and her deceitful lover Albrecht, but the Royal’s flair for ensemble work is evident in every scene, each dancer bringing a wealth of detail to their role. Francesca Hayward and Yasmine Naghdi are pitch-perfect in the pas de six while Marcelino SambÃ© and Luca Acri corkscrew through space with breezy abandon. All this sunlit pastoral loveliness only heightens the pain that’s to come. When we first see NuÃ±ez’s Giselle she’s girlish and warm without ever being twee – her wholehearted love for Albrecht shines through in the musicality of her phrasing, the delighted hops on pointe, the giddy turns across the stage that seem to fizz with excitement. NuÃ±ez adds an enchanting air of mischievousness to the part as well, sparring playfully with Albrecht and turning away with a grin when he gets too forward.

Although he’s technically awesome, I had some pre-show doubts about the fresh-faced Muntagirov as a convincing cad. But instead of natural suavity, he brings a very effective element of brattishness to the role. His Albrecht is a callow youth prone to petulance, one whose easy manners (and beautiful elevation) throw into relief the rustic burliness of his romantic rival Hilarion (Bennet Gartside). That Albrecht is used to getting what he wants is horribly apparent when he clings onto Giselle’s outstretched arm like she’s a toy he refuses to give up as her suspicious mother tries to shove her back into the cottage.

When the truth about Albrecht’s identity is revealed and the famous ‘mad scene’ ensues, NuÃ±ez doesn’t give us any lunatic histrionics – just a shattering sense of destroyed hope and the agony of reliving what were thought to be happy times. While some dancers might deliver a more ethereal, even eerie, reading of Giselle in act two, NuÃ±ez’s now-spectral heroine appears to be both weightless and weighed down by sadness. Just the slow unfolding of her leg registers profound sorrow and gentleness, a sublime contrast with the vengeful Wilis who flank the stage. Led by their watchful and imperious queen, Myrtha (Itziar Mendizabal), this horde of murderous spirit girls eventually dispose of Hilarion by dancing him to death. It’s an intensely chilling spectacle, one that I think should be enforced viewing for all lapdancing club patrons and those loathsome ‘men’s rights activists’ I once saw on BBC3.

Giselle is on at the Royal Opera House until 15th April 2016. Click here for tickets.