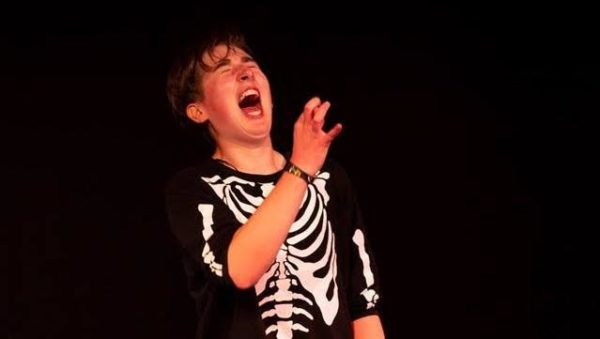 Melody Sproates in *gender not included at Alphabetti Theatre, Newcastle.

“Are you a girl or a boy?” This is the question, repeated on a loop, throughout Melody Sproates’ solo work, *gender not included – a piece that is at pains to prove not only that there isn’t always a straightforward answer to such an enquiry, but that it’s often not even a valid question.

Billed as exploring gender identity through the power of lip synch, there’s an awful lot to love about Sproates’ debut work. Using an aural collage of quotes from everyone from Piers Morgan to Alan Partridge and a spliced soundtrack of pop hits, Sproates explores their own gender identity; what it means to be non-binary and trans in a world that is increasingly hostile and often wilfully misunderstanding of those who do not fit neatly into rigid notions of gender.

All of which makes things sound a bit po-faced, but the show is actually enormous fun. The high energy sound edit is smart and often very unexpected, jokes scattershotted through even the most serious points. It helps that Sproates comes across as incredibly personable – no small feat when we don’t hear their voice, every comment mediated through someone else’s words or music.

The mainstream media’s images of trans / non-binarypeople – Daily Mail monstering aside – tend to be of glossy Americans, sleek now with money and fame, whatever their previous struggles. Sproates – unflashy and unassuming, slightly dorky and a little ungainly in their tracksuit and wheelie trainers – is in contrast someone you would see in the pub, down the shops, in the action figure section of Forbidden Planet. It makes them and their problems – will I get yelled at in the street? Which changing room should I use at Top Shop? – all the more relatable.

It’s Sproates’ first full length piece, and for all its delightful cheekiness and verve, that shows. Though its lack of polish often works in its favour, it could do with some finessing. At times it feels like a couple of smart sketches stretched too thin – even with its compact, hour-long run time – and the ending, which fizzled badly, needs a tweak. There are few things more cringeworthy than a well-meaning English audience not sure if they are supposed to sing along or not: a bit more guidance from Sproates would have prevented a painful mishmash of some people squeaking out bits of Kate Bush in a ‘I want to be supportive but I’m not sure I should be singing’ sort of way, as the rest of us wondered whether we were meant to join in or not, deflating what should have been a rousing finale.

*gender not included is staged as part of Curious Festival, a festival of LGBTQ+ art in the North East, and returns to the Alphabetti on 13th July. More info here.