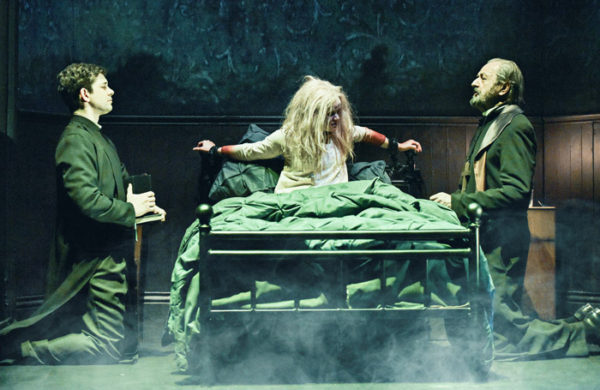 The Exorcist at the Phoenix Theatre. Photo: Robert Day.

Let’s start by addressing the elephant in the room: the film of The Exorcist is really rather good. If you’ve seen it before – if you’ve really sat down and watched it – it is not something you are ever likely to forget. Like all the best horror films, it’s far scarier for adults than for teenagers, dealing with parental insecurities, belief, doubt and philosophical gulfs, along with uncomfortable subtexts like divorce and violent sexual awakenings.

As well as being cinematic, William Friedkin’s 1973 film is also very theatrical. So it’s strange that Sean Mathias’s staging of William Peter Blatty’s original novel feels more like a product of Hollywood than the film does. It isn’t just the sense sceptical theatregoers might get that this is just another reconfiguration of ’70s material, transposed to the stage so neophytes and fans can discover and rediscover the franchise. It isn’t even the fact that the film is explicitly invoked by the incongruous Mesopotamia-set prologue, the image of the demon himself and the few bars of “Tubular Bells” at the end. It’s the Harry Potter-esque emphasis on the redemptive power of love, as well as the opportunistic introduction of a sexual abuse angle that is never really followed up.

It doesn’t help that the play isn’t very long. At less than 100 minutes running time (the film runs for two hours), it feels more like a whistle-stop tour of highlights and fright-sights than a considered exploration of dramatic themes that just so happen to be terrifying. John Pielmeier’s play has as many dimensions as it has acts – which is to say: one.

‘I want to stay true to the story that people know,’ Pielmeier has said. ‘I want to fulfil their expectations while at the same time surprising them.’ Immediately it’s clear that even he is holding himself against a pre-existing benchmark. While not exactly kowtowing to Friedkin, the play never escapes his dark and menacing shadow.

‘What people forget is that there are really no “screams” in the movie – monsters don’t jump out at anyone, there are no cats leaping from closets. It’s a story that is all about tension,’ continues Pielmeier. Yet the play indulges in plenty of jump-scares: from the very beginning when we’re plunged into darkness with a loud bang and flashing lights, to a drawer flying out of a cabinet, and light bulbs bursting here and there. There’s nothing wrong with such tricks per se, but combined with the jump-scares, the play’s atmosphere – spiky where the film’s is misty – comes at the expense of depth.

Things stumble early on, when Regan first communes with the Devil. Any interesting symbolism of the attic being a physical metaphor for Regan’s mind is soon undermined by the Devil’s voice, provided by an uncredited Sir Ian McKellen. He has a lot of fun with the role, but he also sounds unavoidably like Gandalf. The subversion of McKellen as a lovely old man is successful in itself, but we’re never sure how amusing we’re meant to be finding his Mephistophelean charm, and when he starts being sexually predatory it feels like the play is seizing on a cultural moment rather than trying to do justice to an all-too-real phenomenon. Not only that, but the “imaginary friend” trope is old and prescriptive rather than exciting and suggestive. This isn’t a bold reimagining: this is pastiche.

The acting, too, can be unconvincing. Clare Louise Connolly deserves special praise for her lithe, eerie and wholly committed performance as Regan, but Jenny Seagrove as her mother audibly strains to maintain an American accent and inhabit her lines at the same time. Adam Garcia plays reluctant exorcist Father Karras as a bullish average Joe, but in this attempt to make him relatable he ends up making him uninteresting. The ghostly projections of Karras’s mother’s face are heady and intense enough, but they are aimed at our nerves rather than our hearts, and so his filial pain and theosophic doubt feel emptily theatrical.

Obviously there are two kinds of people reading this review: those who’ve seen the film and those who haven’t. In either case, there’s no particular point to seeing this play: it’s not as deft or deep as the movie, which appears in London cinemas several times a year. The play’s production designer Anna Fleischle says: ‘Theatre has amazing, often very traditional means of astonishing an audience.’ And indeed, as radical as the source material and its film adaptation are, Mathias’s production never strays far from the tree, or indeed from theatrical horror norms. Perhaps that’s why it’s playing to packed houses. But the demon possessing this production isn’t Pazuzu – it’s Cashin.

The Exorcist is on until 10 March 2018 at the Phoenix Theatre. Click here for more details.

Arjun Sajip is a contributor to Exeunt Magazine

Review: The Exorcist at the Phoenix Theatre Show Info