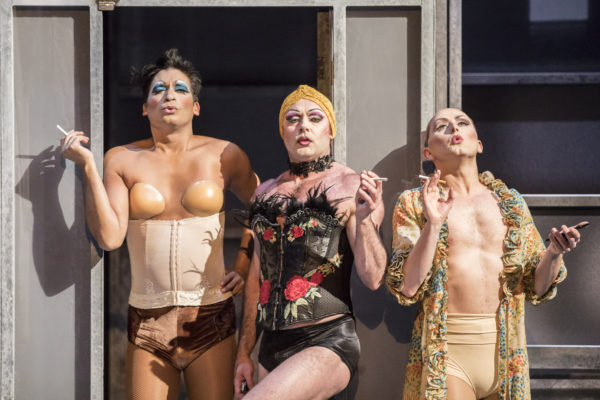 Everybody’s Talking About Jamie at the Crucible in Sheffield. Photo: Johan Persson.

Sheffield Theatres has garnered something of a reputation in recent years for developing brand new musicals, with both Flowers For Mrs Harris and This Is My Family producing sell-out runs and near unanimous critical adoration. This year’s offering is another unashamed feel-good crowd-pleaser, using the unlikely inspiration of a BBC3 documentary as its starting point.

That BBC programme, Drag Queen At 16, was about Jamie Campbell, a 16 year old Durham schoolboy with an ambition of becoming a drag queen. As its close cousin Billy Elliott showed, there’s certainly an audience out there for stories about unconventional working-class Northern teenagers battling bigotry to follow their dreams and Everybody’s Talking About Jamie arrives on stage with a swagger as irresistible as its titular hero.

For a show with this amount of confidence, it’s a surprise that its two creators are newcomers to musical theatre: Dan Gillespie Sells is best known as lead singer in pop/rock group The Feeling, while Tom MacRae is a television scriptwriter whose credits include Casualty, Lewis and Doctor Who. It turns out to have been an inspired choice – Gillespie Sells’ songs are as catchy as anything he’s written for his band, and MacRae’s script is funny and touching, with a real knack of fleshing out even the more minor characters and bringing them to life.

Those characters are what makes Jamie such a success – while John McCrea is something of a force of nature as Jamie: all gangly limbs and outrageously camp delivery, he never overshadows the rest of the cast. Charles Dale is endearingly sardonic as Jamie’s drag queen mentor Hugo, while Lucie Shorthouse gives a touching performance as Jamie’s best friend Pritti, a Muslim girl who slowly comes out of the shadows cast by her more extrovert friends. She also pretty much steals the second half with a gorgeous rendition of It Means Beautiful. There’s also fine support from Josie Walker (who belts out the torch song He’s My Boy with some gusto) as Jamie’s unfailingly supportive mother and Mina Anwar as her best friend.

Macrae’s script is a beauty too – filled with little comic nuggets (“Homework’s so boring, I’d even prefer watching snooker,” says Jamie at one point, with a knowing glance around the home of the sport’s world championships) and there’s even a beautifully meta moment where Pritti reveals some of her backstory with the line “We’re not just your backing singers, Jamie”.

The key to its success is that Everybody’s Talking About Jamie isn’t a simple coming-out tale (it’s established in the first scene that Jamie’s openly gay) or a case of battling against the odds to fulfill your dreams – there’s never much real doubt that Jamie will wear his dress to the prom, nor that he’ll be a success as a performing drag queen. Instead, this is a tale about identity, and the struggles to be yourself when you’re 16 years old and the whole world stretches out before you.

The set design is also eye-catching and ingenious – Anna Fleischle’s split-level stage gives the audience a side view of the band, sometimes in silhouette, which lends proceedings an evocative tone. The songs themselves are a mixed bag in all honesty, with the opening And You Don’t Even Know It by far the most memorable number, although Kate Prince’s impressive choreography means that the action never really flags.

Yet Jamie is not without its flaws – the storyline is a slight one in all honesty, and there seems an awful lot of padding over its 2 hours 20 minutes running time. The first half in particular is far too long, with songs telling the back story of Hugo’s drag alter-ego Loco Chanel being diverting but ultimately unnecessary. And while there’s plenty of poignancy and dramatic tension in Jamie being rejected by his father and teased by the school bully, the rest of his family and friends are so supportive that it becomes unimportant. Maybe if the relationship between Jamie and his father had been explored in greater detail, this would have had more of an effect on the audience, but as it is, Spencer Stafford just has a couple of cameos as Jamie’s dad.

However, director Jonathan Butterell imbues proceedings with such an enormous amount of camp fun that it would be a churlish individual who could fail to be charmed. From the opening disco-tinged schoolroom set number right up to the climatic prom scene, an enthusiastic audience whoop and cheer Jamie on. And when the real Jamie and his mother join the cast on stage, it’s fair to say the emotion almost overwhelms the occasion. Enough people should be talking about Jamie to secure this a West End transfer soon enough.

Everybody’s Talking About Jamie is on at the Crucible in Sheffield until 25th February 2017. Click here for more details.