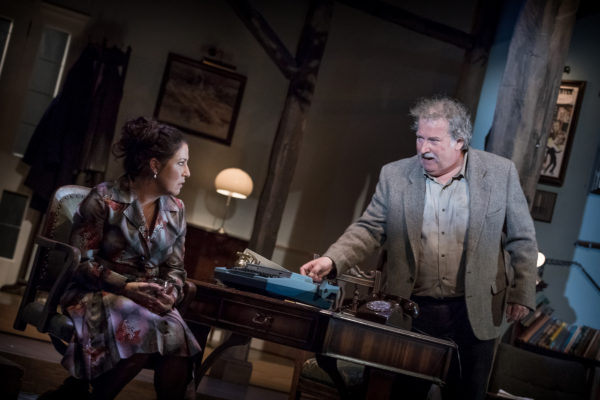 Adam Penford’s touring production of Ira Levin’s classic Deathtrap is a glossy and expensive-looking thing, but it never quite adds up to the sum of its parts. Much of this must be laid at Penford’s door: the direction is uneven, the play is baggy where it should be tight, and flat where it should sparkle. A serviceable and hard-working cast lack both conviction and chemistry, and overall the production simply doesn’t gel.

Paul Bradley is Sydney Bruhl, a playwright whose creative flow has stalled but who is offered a tempting possibility when approached by writing student Clifford (Sam Phillips). Inviting the young man to his remote Connecticut home (a stylish set by Morgan Large) sets the scene for a play packed with twists and reversals that still have the power to shock.

Bradley is energetic and engaging, although hampered by a wandering American accent which rarely even makes it to the end of a line. It’s a problem shared by stage wife Jessie Wallace (although she fares slightly better than he does), and it’s typical of the by-the-numbers approach to the material that no one seems to have thought to fix the problem simply by making the pair of them British expats.

Wallace gives a suitably brittle performance as Myra, though the pair don’t entirely convince as long-term spouses. Phillips handles the part of youthful writer who may not be all he seems well, with a frat-boy affability and conceit that comes to the fore nicely in the second half, but he too feels let adrift by a directorial unwillingness to mine the desires and frustrations at the core of his relationship with his ‘mentor’.

As psychic neighbour Helga ten Dorp, Beverley Klein hams it to the rafters with an accent last heard from a cleaver-wielding Muppet chasing chickens. Personally, I could live a long life before ever having to sit through another ‘comedy foreigner’ performance, but I was audibly in the minority here – Klein’s every exit was to roars of delighted applause. (It would be churlish not to mention that my disgruntlement was out of step with those around me throughout: there were plenty of shocked gasps and bursts of laughter from the audience, who clearly didn’t share most of my reservations).

It’s perhaps unfair to compare a touring show with a previous iteration that had West End clout and Hollywood gloss, but it was impossible not to cast back to Matthew Warchus’ sinuous, sexy Jonathan Groff/Simon Russell Beale production which, while by no means perfect, showed how much fun the material could be in better hands. But in unnecessarily punctuating the action with video clips from classic noir movies, the piece invites such comparisons, and inevitably comes up short.

Deathtrap is on in Brighton until 16 September 2017 and then touring. Click here for more details.