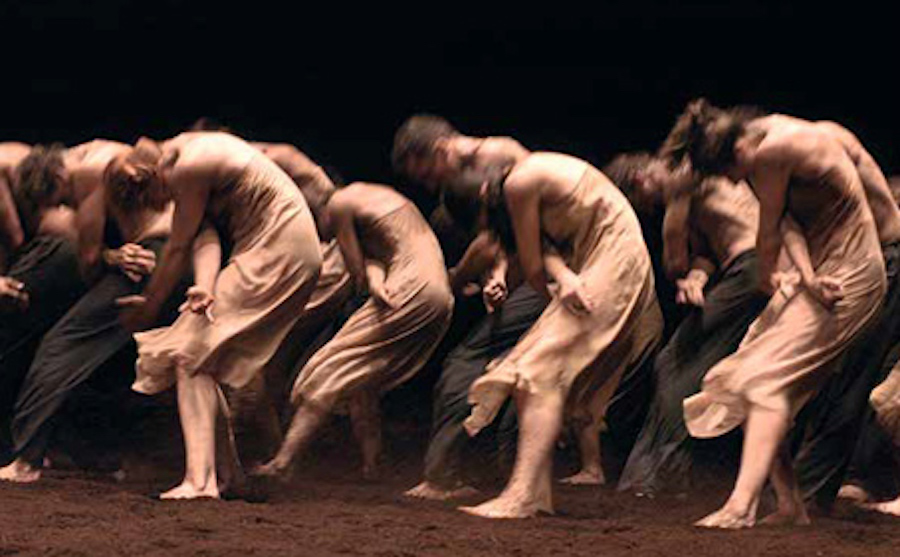 Pina Bausch’s The Rite of Spring, performed at Sadler’s Wells in 2017.

Here are the facts. It’s been a cruel, difficult summer, following a frightening, exhausting spring. I wake up at 6am every day and lie on my back staring in the already yellow day, trying to pinpoint the error I committed to make fate curdle the way it has. An unsaluted magpie? A ladder ducked under? Spilled salt?

As I type this, I listen to the sound of rain on mynoise.net, to drown out the sound of the ongoing eviction. The volume of rainfall is one of the few things currently in my control, and I’ve turned the volume up all the way. Into each life some rain must fall, but too much is falling in mine.

I have seen Pina Bausch’s The Rite of Spring three times. I’ve seen it twice at Sadler’s Wells, performed as part of triple bills by the English National Ballet, and I’ve seen ‘Dancing at Dusk’, a filmed rehearsal of the piece on a beach in Senegal, just before lockdown.

In 1913, Igor Stravinsky wrote the orchestral piece The Rite of Spring for Sergei Diaghilev’s Ballet Russes. The music was shockingly avant garde for its time and purportedly caused a riot on opening night; even now, the ominous thunder of the brass and the anxious jumping of the woodwinds disquiets and disturbs. Walt Disney used an adapted version of the piece in Fantasia, for the section about the evolution of the earth and the reign of the dinosaurs, recognising its brutal, fundamentally primal qualities. Pina Bausch created her version in 1975, with her Tanztheater Wuppertal, and her Rite of Spring is often considered her seminal work. It’s something about those beating pliÃ©s and outflung arms, it’s something about the raw rut of terror visible in every throb and flinch. Bausch imagined The Rite of Spring as a sacrificial ritual, in which a group of young women and a group of young men collide, scatter, thump, roil and grab, until one girl is chosen to wear a red dress and dance herself to death. We don’t know why she has to die. It is only true that she must, and everything in The Rite of Spring compels her towards her death.

When I first saw the piece, in 2017, the English National Ballet were only the third company to have ever performed it (after Tanztheater Wuppertal and the Paris OpÃ©ra Ballet) – a real triumph for them, and a coup for artistic director Tamara Rojo. I liked knowing all these things; it spoke of huge and important discussions behind the closed doors of Sadler’s Wells, of the great and good of the ballet world moving the chess pieces across their giant board. I reviewed The Rite of Spring as part of a triple bill for Exeunt; I reviewed in again in a different ENB triple bill in 2019; in this small way I felt part of the game. In both triple bills, The Rite of Spring was the last piece of the evening, partly because the earth that is raked across the stage is time-consuming to clear up and would have resulted in an overstretched interval, and partly because, frankly, it’s hard to top The Rite of Spring. Both times there were standing ovations across the theatre.

Watching (good) theatre is a communal experience that necessitates retreat into a cavern at the back of the mind. It’s like holding hands with someone and then diving underwater together; you can no longer see or hear them, and some new element has taken over most of your senses, but they are still there, and your every reaction to the new element is tempered by the fact of their proximity. However you might emote privately in a theatre, you’re also emoting mere inches away from someone else. When the house lights come up, you all surface at the same time, breaking the barrier of the water and gasping for air. You dive; you come up. See me not; see me. We are alone; we are alone together.

The sensory drama of this experience, separate to the experience of the actual spectacle on stage, is one of the reasons I adore, for example, the hypnotic, meditative, audience-flattening choreography of Christos Papadopolous, and why I hate watching most live stand-up comedy, because the audience at stand-up comedy almost always seem to be laughing to prove to everyone else that they got the joke. I sit through most stand-up the way I sit through most theatre and dance: in silence, thinking about what I’m seeing. It takes a lot to make me burst out laughing, though it’s ludicrously easy to make me cry. No one invites me to watch stand-up anymore.

Many other critics I know, and a good many artists and writers, tell me that they have a ‘professional’ brain and an ‘audience’ brain. The former watches while thinking about the act of watching, and considers the spectacle in future tense. Though the play or the ballet or the concert happens in front of them, it will not actually take place fully until they talk or write about it afterwards. The latter watches what is happening intimately and immediately, and considers the spectacle in present tense. To adequately explain how utterly compelling I find The Rite of Spring, I have to tell you, I could barely get it together to think with my professional brain. When it finished, I wanted to grab people and scream, “Wasn’t that amazing?” in their faces. That was the extent of my professional criticism, though I tidied it up when it was time to file.

When I first watched Dancing at Dusk, the rehearsal for The Rite of Spring that never was, things had already gone quite wrong. The fact that Dancing at Dusk existed at all was a harrowing snapshot of the time. In March, a specially created company of 38 dancers from 14 African countries had gathered at the Ecole de Sables in Dakar (directed by the brilliant Germaine Acogny) to perform the Rite, but international lockdowns were announced shortly before their premiere. Cities across the world closed. The rehearsal was hurriedly called on the beach, just before social distancing measures were put in place. Sadler’s Wells released the final edit of the rehearsal in July.

I wrote a short article on the piece – you can’t review a rehearsal, it’s not on – for Springback Magazine. My viewing of the piece was very unlike my experiences at Sadler’s Wells. For a start, it was an intensely private experience; I watched it on the same laptop I am now typing up this article, with the T loose on the keyboard, in an office in a house from which my partner, unbeknownst to us, was shortly to be evicted. I had a link to a locked video on Vimeo, and I could go back and forth along the piece as much as I wanted. I could watch, again and again, the moment the sacrifice was chosen. As it was a filmed rehearsal, I could see the faces of the dancers much more clearly. They are superb. They look like people in the middle of a terrifying sacrificial ritual.

Watching the piece alone like that, I was reminded that The Rite of Spring is, well, a rite. It’s a stupendous, monstrous, freakishly seductive dance work, and it is also a representation of an old superstition, portrayed in all its intensity and fear. In the middle of a pandemic, awash in the sewage of a run of bad luck that has, unfortunately, only worsened since I began this article two weeks ago, what strikes me is not the extraordinary performance, the panoramic camera work, the mystical atmosphere of the beach, or even the choreography that is so singular, so shocking that there are lifts and throws beaten into my brain like an engraver’s imprint – no, none of these, what strikes me is that at some point someone somewhere has tried a sacrifice or a ritual or a spell like this to make the Bad turn to Good and if they tried it in 2020, it didn’t fucking work.

I have always watched The Rite of Spring with an ‘audience’ brain, only barely forcing my ‘professional’ brain to pay attention. I hadn’t realised until I saw Dancing at Dusk that I also watched the Rite with the calm distance of someone who hasn’t started wishing on fallen eyelashes and plucked daisies for a better version of reality. I felt I was seeing, for the first time, what Bausch must have actually been trying to portray: not “I am so great a choreographer” but “How great a horror it is to know I am alive”.

Dancing at Dusk is available to watch online via Sadler’s Wells until 31st July: link here.

This is the second piece in Exeunt’s Redux Review series, which invites writers to talk about performances across multiple encounters; one a pre-lockdown live staging, one in livestream form. To read them all, click here.