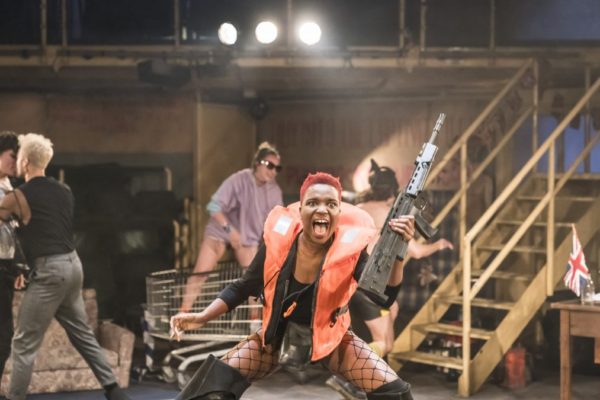 “It’s funny isn’t it? In 1977, someone shouting NO FUTURE sounded like the most extreme nihilistic punk. Forty years on, it’s a fact. It’s mainstream climate science.”

As Amyl Nitrate (played by Travis Alabanza) perceives, ‘NO FUTURE’ was once a rallying cry of the punk movement, not just a closing refrain to a Sex Pistols anthem. It spoke of a stark fatalism imbued with fury, frustration, and a deep distrust in the current status quo. Chris Goode’s adaptation of Derek Jarman’s 1978 film Jubilee toys with this articulation, hurtling the punk movement into a future that seemingly shouldn’t exist, to see how it survives.

Goode’s adaptation spars with Jarman’s film, keeping faithful to the central tenets of the piece while modernizing it to reflect the current age. It’s messy, chaotic, sex-fueled, and driven more by affect than narrative. Queen Elizabeth I, brilliantly played by one of the film’s original stars Toyah Willcox, travels to the present day with the help of Lucy Ellinson’s Ariel, and passively witnesses the countercultural energy that’s brewing beneath 21st century neoliberal consumerism.

Goode adds elements of the queercore movement into the punk aesthetic, as well as references to the current political climate (cue Brexit, Trump, etc). There’s a palimpsestic quality to Goode’s adaptation, new writing superimposed on top of an older script, acutely aware – sometimes overly – of contemporary parallels. There’s a productive tension, like a scrap, but also reverence for Jarman’s punk film. The belief in chaos as a source of communion, and perhaps even celebration, still resonates here.

In the halting first act, the chaos is subdued and a touch contrived, as the roll-call and lengthy scenes introducing each character inhibit any building of momentum. There’s something cavernous in Chloe Lamford’s set that, while evoking a sense of abandonment and disrepair, forfeits intimacy.  The camaraderie is there between characters, but occasionally the audience is left out. The second act offers a more mesmerizing enunciation of the emotions fuelling the first, and provides the most searing and provocative sketches of post-modern punk.

Alabanza shines, rewriting and re-righting history with a fierce wit and biting intelligence. Sophie Stone is terrifying as Bod, the leader of the gang, and Yandass Ndlovu as Kid gives an impressive dance performance.

Goode’s Jubilee exhibits a self-awareness that positions it as a modern, or postmodern, piece. Alabanza’s Amyl introduces the play as: ‘An iconic film most of you have never even heard of, adapted by an Oxbridge twat for a dying medium, spoiled by millennials, ruined by diversity, and constantly threatening to go all interactive.’ Goode writes himself into the text, reasserting the reflective process of writing, sometimes exhaustively, but it’s also a rigorous and intelligent examination of the present.

This extends to theatre as well, that dying medium. In many ways, Jubilee is an exploration of theatre’s future, and what punk theatre might look like. Rose Wardlaw’s ‘sex positive’ Crabs mentions she’s an actor, but mainly of devised work. Lucy Ellinson’s Viv is a performance artist, and Ndlovu’s Kid is a naive artist who maintains a belief in the integrity of music. Much of the piece is a jostle between ideas of performance and art. Amyl gives it to us at the beginning: ‘What is the point of doing plays? And films? And”¦ installations? If you live with integrity, art is totally redundant.’

Jubilee makes it clear that the world we live in (and it’s not a hard argument to make) is a disingenuous one. And that means theatre, as a space for punk, for protest, for communal performance, has a long and prosperous future.

Jubilee is on until 10 March 2018 at the Lyric Hammersmith. Click here for more details.