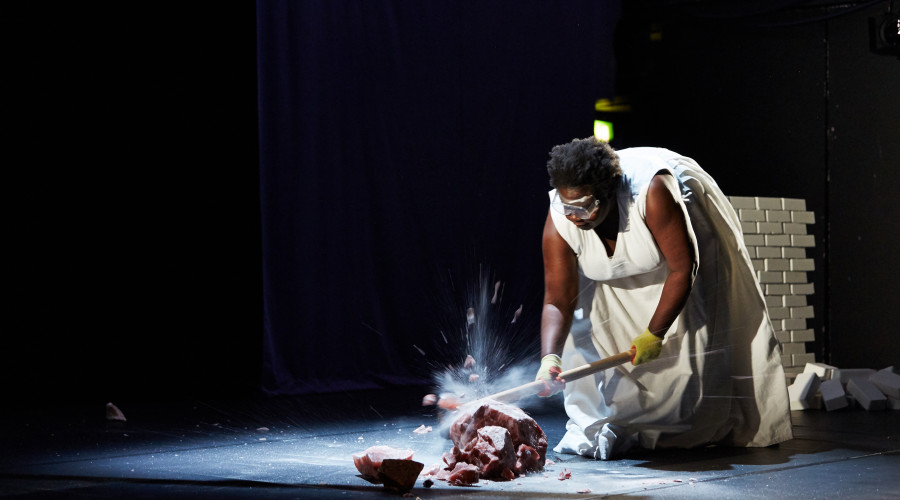 Salt at Summerhall, as part of the Edinburgh Fringe 2017. (photo: The Other Richard)

Rub salt into the wound (idiom) – to make a difficult situation worse; a form of torture. Yet salt water can be also used to clean a wound and promote healing.

Selina Thompson’s powerfully poetic show is about a grief that will not and should not be assuaged. It is about slavery and its oppressive legacies that endure in European capitalism. Thompson recounts her voyage on a cargo ship that traced part of the route of the Transatlantic Slave Triangle, then her time in Ghana, Jamaica, and home to Britain. In striving to make a show that is a ‘living monument’ to slavery, Thompson interrogates the relationship of diasporic identity with place and comes up against the devastating question, ‘How do you mourn someone you have never met?’

Throughout Thompson’s show, salt is not just a compelling metaphor (what else can sting, preserve, and heal?) but a tangible presence. The hunk of pink rock salt squats on the floor as the audience file in. Later Thompson will take a sledge hammer and, having first put on safety goggles and instructed the first two rows of her audience to do the same, smashes it into more manageable but still hefty chunks, sharp pieces and glittering dust. A memorable visual insight into the connecting structures of capitalist, racist oppression is given when Thompson pounds chunks of salt with the hammer, gradating in size from the small pieces that represent Thompson and her friend, arguing on the boat; to the Filipino crew, who do not speak to or defend the women; to the ‘Master’ of the ship, who takes it out on the crew; to the union; to the state; to Europe, the biggest chunk of all. On the boat, Thompson experienced shocking racism from the ‘Master’ who said that racism was in the past. In the earlier part of the show, ‘Europe pushes against me’ becomes Thompson’s refrain for every instance of racism inflicted upon her. She replies, ‘I push back’. On the ship, Thompson describes how it became harder and harder to push back against Europe, making us conscious as an audience of the difficult emotional and other forms of labour that have gone into the production of the show we now consume as art.

As a performer, Thompson is in full command of the space, statuesque in a white dress, from the moment we file in to the music of Laura Mvula and the scent of a diffuser. There is palpable anger at the conspiracy to deny the significance of black lives. Her performance is also generous and open, ensuring that she takes us with her. Thompson’s writing is lyrical and stark, studded with phrases that crystallise in the imagination: ‘Time accumulates’ to denote the passage of time on the voyage.

As we leave the theatre, each member of the audience is encouraged by Thompson to take a piece of salt from the basket. She instructs us to keep the salt and to remember, to mourn, to refuse to be consoled.

Salt is on at Summerhall until 26th August 2017. Click here for more details.

Hannah is a writer, academic and theatre critic. She is London Reviews co-Editor for Exeunt, with a focus on fringe and Off-West End theatre. She has a PhD in contemporary feminist theatre and form from the University of Oxford and is now a lecturer at the University of Liverpool. She is also a playwright and has worked with Camden People's Theatre, Soho Writers' Lab, the North Wall Arts Centre, and Menagerie Theatre Company.