In a market heavily reliant on old favourites, any attempt at doing something original is to be applauded. And while it’s true that new musical Crush doesn’t have the makings of a classic, it’s an energetic and exuberant show performed with verve by a likeable cast.

The story is slight but engaging: a 1960s girls’ school has lost its progressive headmistress, and been taken over by a woman who sees its primary role not as educating young women for their own sakes, but shaping them as the potential wives and mothers of important men (her standout number Future Mothers of the Future Sons of England is delicious, a bitingly sharp satire of attitudes that the rest of the show doesn’t quite live up to). Played with malicious glee by Rosemary Ashe, Miss Bleacher is a class snob and possibly a racist (she airily dismisses black scholarship student Daimler as being named after the stolen car she was conceived in) and determined to root out any ‘immorality’ – especially a rumoured affair between a couple of the sixth form girls.

It’s refreshing to see the central romance in a show be a gay one, and Stephanie Clift as smitten Susan and Charlotte Miranda-Smith as her wealthy, spoiled and self-obsessed love are both a delight. The love triangle plot feels slightly shoe-horned in and is flimsily resolved, though it does give Brianna Ogunbawo a chance to shine, first as the neglected, lovelorn Daimler and then showing some serious slink in the uneven second half as nightclub chanteuse Desiree.

Although given little in the way of characterisation to work with, Sara Crowe as kindly teacher Miss Austin gets some nice moments, and as the siblings whose inheritance might just save the school, both James Meunier and Kirsty Malpass are on fine comic form. The latter’s hockey stick tap dance routine with the girls is one of the highlights of the show – even a curmudgeonly class warrior like myself, with an ingrained distaste for boarding schools and team sports, couldn’t help but be swept up in the enthusiasm.

Kath Gotts’ numbers are catchy, frothy fun and the talented ensemble does them proud, though Maureen Chadwick’s book is occasionally a little clunky (attempts at signalling the era by having one of the girls speak in ‘groovy’ American are positively jarring). The play also loses focus in its second half when it expands from the school into London, and feels a little too glib about the suicidal feelings of the heartbroken Susan – though it’s hard to stay mad at a show that suggests the best cure for what ails you is a night in a gay club being sung at by a Marlene Dietrich impersonator.

David Farley’s design is stylishly evocative of the era without being overpowering, and director Anna Linstrum keeps the whole thing bubbling along at such a pace you only rarely notice how lightweight the piece really is. But perhaps that’s part of its undeniable charm – it’s not often you see a show where themes such as feminism, class, privilege and lesbianism are simply part of a lightweight, sugar-sweet confection. Certainly they are acknowledged – it’s obvious, for instance, but only lightly touched upon that the potential consequences for the girls’ transgression are more significant for the one from the working class family; the play doesn’t feel the need to hammer its points home. You’re far more likely to leave the theatre twirling an imaginary hockey stick and humming about navy knickers than pondering that you’ve been watching a show that’s actually pretty progressive – and that, to me, seems no bad thing. 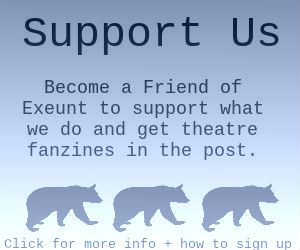