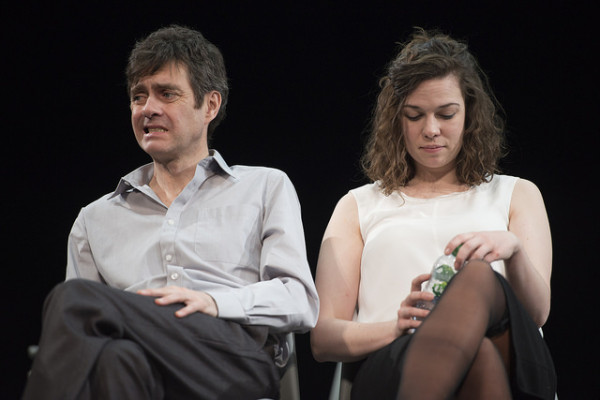 Paul Higgins and Camrie Palmer in Blackbird at Citizens Theatre.

David Harrower’s Blackbird has spent the last forty-eight hours slicing through my brain like a butter-knife.  One damning line in particular: “…adults lie. They don’t even know they’re doing it”. And Blackbird exists in a nest of lies.

Seventeen years after her abuse at the hands of family friend Ray (Paul Higgins) Una – then a child at twelve, now a worldly twenty nine –  tracks him down in his stable new life as ‘Peter’ with the intention of confronting him about their tangled, pockmarked history. In the filthy midden of his work’s staff-room, the two now-adults engage in a scorching exchange of blame and begging, desperate to wring some truth from the wreckage of their relationship.

Harrower’s script is one of the best of contemporary Scottish theatre. At a lean 1 hour and 40 minutes, neither a beat nor a line is wasted, blurring the deceptively simple relationship of abuser/abused with layer upon layer of power-plays and misdirection. Caught in a knot of police protection, even the characters’ identities are fluid. The play is an inescapable back-and-forth, enhanced by Gareth Nicholls’ dance-like direction which sees the characters circle each other, biting and backing off, each trying to become master of the mess they’ve found themselves in.

For a play that embodies such roiling ambivalence, Neil Haynes set is a deceptively monochromatic wasteland of industrial carpets and bleached lighting, black walls and a blazing white door; a prison cell strewn with (what seems like) decades’ worth of refuse – a stark metaphor for the horrifying damage that continues to litter Una and Ray’s lives. At the beginning of the play Ray desperately tries to stuff the debris into an already overflowing litter bin. By the end, he and Una gleefully scatter that rubbish around them, rolling in it, revelling in it. Daniel Krass’s minimalistic sound design and Stuart Jenkins’ equally subtle lighting recall Nicholls’ Into That Darkness in their ability to put the audience on edge: unnerving slight changes in an otherwise static staging.

Paul Higgins’ Ray is a man uncomfortable in his own skin. Especially in the first half of the play he is in constant movement, vibrating with anxiety and – compounded by Higgins’ scrawny chest and earnest eyes – perhaps we feel more sorry for him than we should. But this is the illusion of Harrower’s play and the illusion of the paedophile: the creation of a mutual, special relationship, soon to be twisted and abused. It’s hard to tear your eyes away.

The Citizens’ current Actor Intern Camrie Palmer’s task is maybe the more difficult: to make Una the equal of the man who once took such advantage of her. She begins strongly, easily embodying the slightly blustering twenty-something taking her life in her own hands. She is impressive in Una’s long monologue explaining all that she felt about Ray, carefully handling the woman’s emotional shift from distanced retelling to unexpected vulnerability. But she’s less successful when it comes upholding this sensitivity in her interactions with Higgins. Harrower’s play demands equal push and pull from both actors, and in this, Palmer’s Una could be more nuanced, especially in the skin-prickling final scenes.

Following Into That Darkness, Gareth Nicholls continues his run of burrowing fearlessly into the harshest of dramatic territory, handling the extremes of human experience with sensitivity and boldness. However, where the pairing of Blythe Duff and Cliff Burnett upheld the drama of that play, the two protagonists of Blackbird are a little too unevenly matched to fulfil the spiralling intensity of Harrower’s faultless script.

Blackbird is on at Citizens Theatre, Glasgow until 5th March 2016. Click here for tickets.