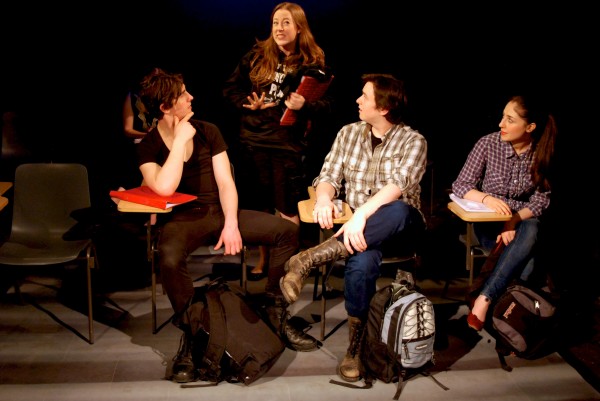 At the Broken Places offers an oblique approach to the Columbine Massacre which is so conflicted that it never approaches dramatic coherence. Joseph Horton’s new play premiered at the 2010 Edinburgh Fringe and is presented by Savio(u)r Theatre, a company which seeks to open a dialogue between British and American theatre making. Unfortunately neither the script nor the production does justice to the provocative subject matter.

The play is set around the staging of a play by Columbine stand-in Sierra High School, which seeks to re-enact the tragedy on its 20th anniversary, seeking some closure for the school and the community. Arrogant but unhinged Nic Davis is given the role of gunman Kit (Jamie Biddle) and the nervous Eli Alton (Noah James), who secretly pines for his more popular friend, the role of David. As the play enters rehearsals, their lives begin to cross dangerously over into those of their characters, who themselves are avatars for murderers Eric Harris and Dylan Klebold. The lines between art and life are superficially blurred, and the school and townspeople are forced to confront the impact the incident has had over the last two decades of their lives.

The premise has some strength, though it bows under the weight of its improbability. What it does offer is space for the consideration of the motives of the killers, and the difficulties faced by survivors of such atrocities. Unfortunately, any subtlety is drowned out by flashy, overwritten monologues and a wildly uneven tone pitched closer to the wordier sections of a high school slasher film than the soul-searching drama it aspires to be. Horton has written some stirring speeches, but there are simply too many show-boating moments; in the case of a subject already so charged with emotion, less is more may be a worthwhile dictum.

Danny Atkinson’s soundscape, which blends together re-recorded snatches of radio and television broadcasts of the events unfolding, is one strong aspect, but the majority of the staging and design tends towards the messy. Credit must go to Noah James, who builds slowly to a thrilling conflict with Biddle, however elsewhere the performances are often flat and unpolished.

Perhaps this production would benefit from sharper direction and a refocusing on characters rather than ideas, but then perhaps not. A telling monologue by school Principal Linda Jeffers (Jennifer Armour) near the play’s close identifies the impossibility of finding a dramatic or artistic form commensurate to the horrors of the massacre; she may be overstating the case, but At the Broken Places is strong evidence in her favour.

At the Broken Places Show Info