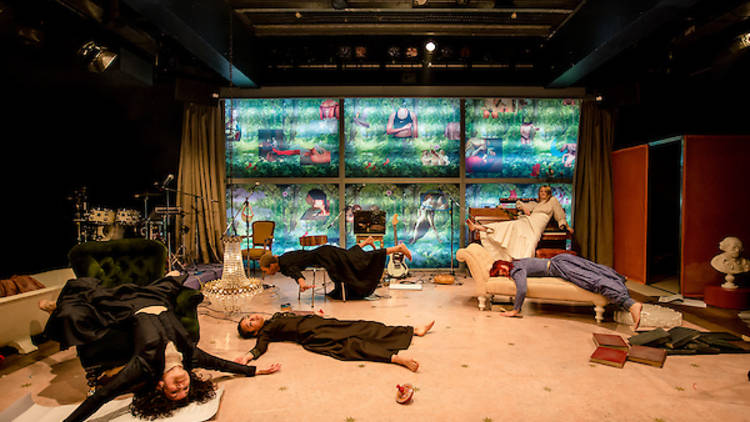 When a big group of people sit in a room together to watch a performance, magic happens. Their heartbeats synchronise, according to scientists. There’s a quality of attention and focus it’s hard to find anywhere else. A small, real moment – the twitch of an ankle, the boiling of a kettle – can trigger an emotional avalanche. Laughter bubbles up, one audible snicker creating a ripple of loosened inhibitions. Sometimes (very rarely) you’ll feel the shoulders of people next to you shake, and realise that half the audience is mopping up tears.

I’ve interviewed a lot of directors, actors and playwrights and something they all tend to say they love about theatre is ‘being in a room together’. To be brutally honest, it’s the first thing I cut from the transcript, because of course. Liveness. That’s why everyone’s in it. But now I feel like a brat for ever having taken that for granted.

Paradox: An artform that’s universally seen as ‘good for you’ is now certifiably bad for your health

Liveness is what makes theatre life-affirming, special, and dangerous in a metaphorical sense – it’s ephemeral, hard to censor, predict or control. But now that gatherings of people are literally dangerous, theatre’s left without a core part of its identity. To survive, theatre has to do things that are not-live, or post-live, or differently live.

Two weeks ago, theatres across the UK closed. And almost immediately, there was a huge exciting outpouring of idea-sharing; competitions, livestreams, digital festivals. Big theatres opened up their vaults; without fear of cannibalising ticket sales, they could suddenly stream shows for free, and reach new audiences from across the world.

This looks a little like utopia – finally, the dream of a theatre that’s accessible to anyone, whatever their budget, wherever they are. The only barrier to entry is owning a computer. But there’s something un-utopian about it, too, because it’s frantic, not dreamy. Less like building reed shelters in a peaceful farming commune, more like wielding picks and spades in a hectic gold-rush. There’s a perfect storm of factors that are making people scramble to prove their worth and value; the neo-liberal pressure on individuals to market themselves, the threat of jobs disappearing, the very real sense that if theatre doesn’t prove its value now, no one will think to preserve it when this is all over.

But finding the headspace to be truly creative feels impossible at the moment, especially when the target is as massive as ‘replicating liveness online’. It feels like everyone I know is simultaneously experiencing the kind of crises you only get once a decade, all at once, encompassing employment, family, anxiety, housing, sickness. Everyone’s coping mechanisms are suddenly uncomfortably visible as they scramble to distract themselves with frantic activity, or retreat into quiet mourning.

Turning to work is a way of getting back a lost sense of identity and purpose; the things that jobs provide. As a theatre critic I feel like I’m moulded, evolved in the image of my job: extra big eyes for taking it all in, sharp elbows for the bar queue, small legs for tiny West End seats. Trying other stuff, I feel a bit bent out of shape.

The market needs the work of creative people now more than ever. The UK’s lockdown has created a heightened need for stories and entertainment; even as the freelance writers, directors and directors who are most skilled at creating them have been left without jobs overnight. But is the answer really to fill that void from our kitchen tables and sickbeds? There’s a danger that in the rush online, theatre loses its identity too, and gets flattened into more #content.

The last show I saw before this whole mess was Christopher Green’s No Show at The Yard. In its opening moments, Green sat coyly in the audience in a pink suit, refusing to get on stage and perform. It’s an image that means more to me now; because resisting the compulsion to be productive and active feels harder than ever.

There’s a reason why ‘post-apocalyptic’ is a genre but ‘mid-apocalyptic’ isn’t, so much – it’s easier to tell a story after the dust has settled. In a middle of a crisis, we reach for familiarity, not innovation – maybe that’s why the National Theatre’s announced series of archive livestreams focuses on their most mainstream hits. Treasure Island, not Barbershop Chronicles.

Before all this happened, I used to beat myself up for not using my rare free evenings to watch documentaries or foreign-language films. Now, I realise that my brain knew what I didn’t – that those snatched evenings were for escapism and comfort. Stress makes you retreat inwards and seek comfort in small things. Everyone on social media is making weird and lumpy loaves of bread, reassured by the tactile magic of pummelling and nurturing and steamy triumph. Inwardness can produce some lovely things. My window boxes have never looked better. But my favourite works of art come from somewhere more outward-looking  – from that expansive fearlessness you need to make something new.

I know that:
Theatre isn’t going anywhere.
People won’t forget you if you stay quiet for a month, or even a year.
It’s better to make one creative thing you’re truly proud of than eleventy billion forgettable bits of hackwork.

But it would be easier to say that from a place of secure employment. Precarity indoctrinates you with a mindset. You have to be extravagantly nice to the people who cancel your gigs without compensation, because if you shout, they just won’t take you on again. You have to rise at 5am and fill every waking hour, like one of those viral writing schedules of productive humans. You have to convert every failure into an opportunity, apply for everything, cling onto vertical surfaces like a virus that’s drowning in antibacterial handwash.

Coronavirus has made a lot of invisible things suddenly visible. But for me, the biggest one is the unsparing economic conditions that underpin a society whose social safety nets are wearing thin.  When crisis hits, it doesn’t matter how fully optimised you are. Crises hit the people who can least afford it. Like the underpaid ‘key workers’ who can’t stay home, or people on zero hours contracts with non-existent financial settlements, or the freelancers who’ll have to make it until June with no income.

So I’m not going to say ‘don’t try and be productive in the middle of a pandemic’, because for a lot of us, there’s no choice. But I do think that this is an opportunity to rethink both ‘work’, and what ‘being in a room together means’, and it’s not necessarily interactive livestreams. I think it’s about some of the other things theatre is good at – empathy and working together.

Paradox: Staying further apart can bring us closer together

At the moment I’m thinking a lot about Chekhov (although yes, the theatre world’s addiction to Three Sisters is probably one of the things to rethink when this is all over). Specifically about the tensions between ennui and frantic striving that fill his work, the way that relief from misery and listlessness comes through labour. I’ve seen so many variations on these lines, from chorus to despairing battle cry to helpless mantra: “There will come a time when everybody will know why there is all this suffering. But now we must work, just work!”

There’s a relief that comes from work, but maybe that relief is truest and strongest when the work is directed at building a better future world. I’m not doing a great job of writing at the moment, but I am thinking hard about how Exeunt can be a supportive community, about the potential we have to bring people together and provoke conversations about new ways of working. A very rare silver lining to this whole mess it that it’s forcing people to think collectively, not individually – and to realise that we need a society that values and looks after everyone, not just the few who are healthy, productive, and securely employed. The challenge will be to dream up ways to stay in the room together, supporting each other, when the crisis is over.