Clear Confusion
At Rote Fabrik, Studio B, Zurich
24°C
243/365
dance: I find myself making a heartbeat sound with my mouth closed – Ub Ub, Ub Ub – a wobbly twitch in my right shoulder – as if my shoulder and upper arm are made of jelly – the face is indifferent, the pelvis is stiff, the rest is open to interpretation.

Mishandled Archive started long before it started on the 1st of January 2017. It started sometime in 2013 when I was working on a performance titled ‘Dear Hypothetical, there is oil all over the place.’ The performance used home videos, family documents and photographs to tell a story about generations of political activists living on the Wandering Island in the heart of the desert in Iran. The albeit well-documented history narrated in this performance blurred the boundaries between fact and fiction and posed questions around the authenticity of mediatised narratives. As I was choosing family photos and documents for this performance, I felt an urge to disperse these documents in public places, on the streets and beyond the theatre space. I thought of printing them as stickers and sticking them on lamp posts and billboards. Yet I was not sure how to tell the story of the photographs on a sticker and, as someone who had recently arrived in London, was slightly worried about damaging public property. I had experience of spray-and-run political graffiti in Iran but London wasn’t home at that time. The idea was in the back of my mind but never realised until in December 2016 I decided to start a new daily year-long project. [What was my other year-long daily project? ’30 Seconds of Today’ was 366 sound recordings of my surroundings recorded every day in the Netherlands, Iran, Turkey and the UK and published daily on Soundcloud in 2012-13.]

December 2016 – I worked out the rules of my new year-long project:

January 1, 2017 – I made the first piece of the project at the Live Art Development Agency (LADA). 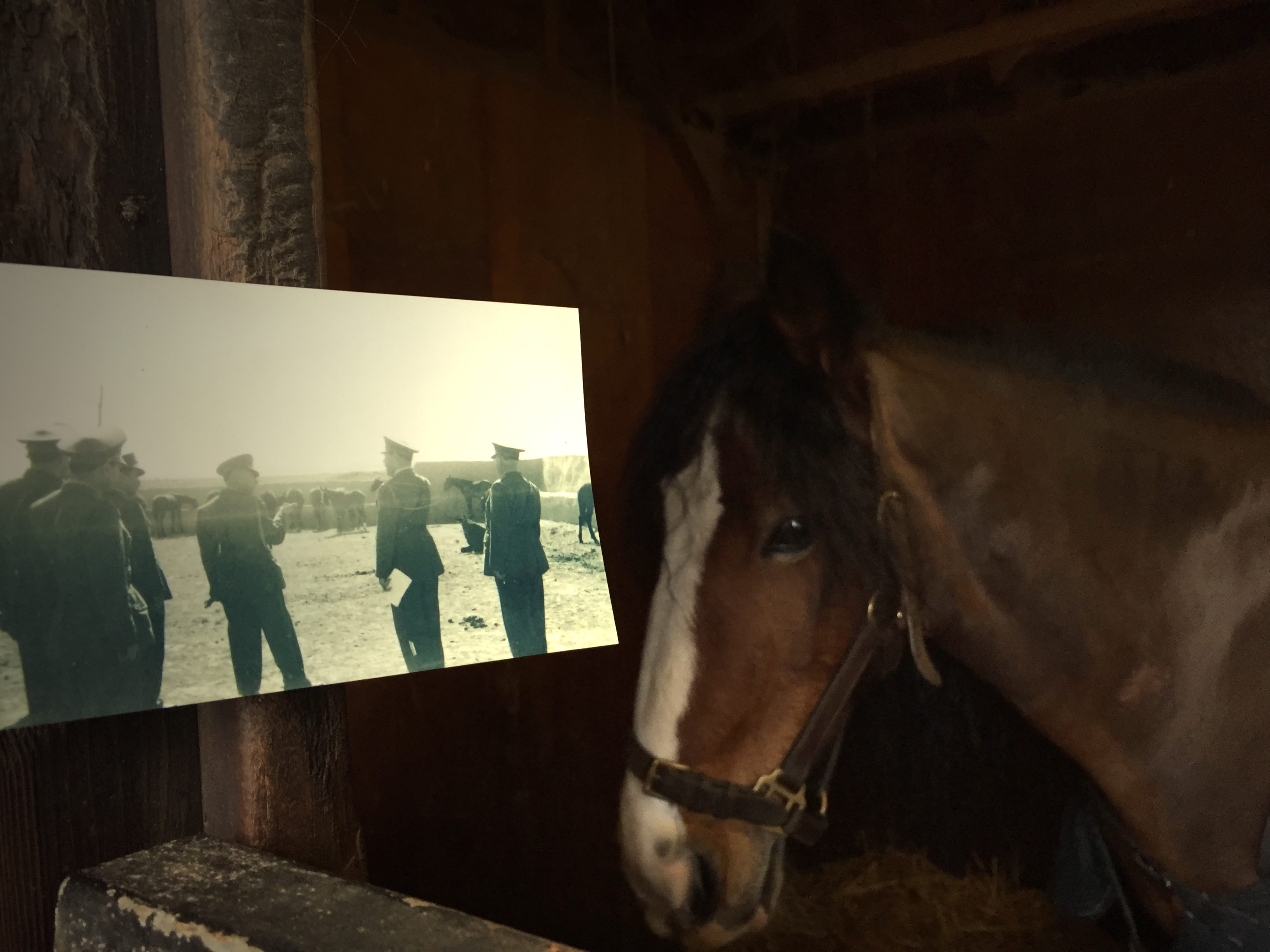 January 6, 2017 – I asked the permission of the manager at Dulwich Riding School to make a piece near one of their horses and told her about the year-long plan. She did not seem convinced that I will continue to do this for another 359 days. Fearing that leaving the photo behind in the stable might lead to the horse chewing it and choking on it, I gave the photo to the manager to keep. She took it. I have imagined her keeping the photo on her office desk by the stables.

The archive I work with is based in Tehran. It is a collection of over two thousand documents mainly from 1900 to 1984 including family snapshots, amateur photographs, letters to family members, letters from prisons, wills, identity and membership cards, stamps and envelopes, obituaries and over thirty years of memorials in public newspapers, mostly acquired in Iran and reprinted in London.

There are several stories of births, deaths, displacements, executions, loss and joy hidden but hinted on in this archive. There are also 365 stories of how, where and why each of these micro-installations came to being. The story of the people in the photo sat beside the story of the place, and the pigeons and the dogs, the foxes and the crows, those who passed by, those who stopped to talk, those who ‘liked’ or ‘commented’ online and those who later found a weather-beaten photo and got in touch. The micro-histories would either seep into the dances I was performing every day or surface through the title or the hashtags I added to each post.

September 2017 – a fifteen year old girl living in a small farming village in the suburbs of Zurich writes to me to say she has found one of my photos ‘Clear Confusion’ at Rote Fabrik in Zurich. She was dropping off her younger sister at a theatre course when she found an old hole-punched photo of a man in army uniform on the handrail. She was curious to know more. She was wondering if others have found my other pieces.

Mishandled Archive is an artistic investigation into how geographical and formal transposition of private documents can reiterate historical narratives. The project proposes the act of ‘mishandling’ as an alternative mode of handling that encourages misplacing, re-placing and shuffling the archive as a way into seeing unseen perspectives and narrating untold social, political and personal histories that intertwine a past, present and future; now imagined, now felt.

One of the aims of the project is to insert pieces of my family archive into other places and online archives to allow them to be seen and read differently and beyond my control – an invitation to the viewers to re-possess the pieces of this archive and re-personalise their stories. The daily actions were never a purely photographic task but rather site-sensitive live actions that merged photography, dance, writing, archiving, storytelling and public art. As the archivist, I myself was also trying to reinterpret the documents and the many undocumented stories I had orally gathered. My reinterpretations turned into the daily dances and their combinations with the site and the image.

Through the course of the year, I dispersed my family archive in London, Newcastle, Glasgow, Tehran, Nain, Anarak, Rig-e Jenn desert, Kashan, Tochal, Kurdistan, Rome, Liverpool, Hamburg, Schwarzwald, Zurich, Milan, Kiev and Hormoz island in the Persian Gulf as well as on aeroplanes above the North Sea, Larochette, Dunkirk, the English Channel and the Alps. Thirty two pieces of Mishandled Archive found new homes with others – a few were gifted at the place of installation and others were found by people passing by. The daily pieces initiated several encounters and conversations, in the city, the nature and online.

December 31, 2017 – day 365, last day of the project. I go to Tehran’s main cemetery, Behesht-e Zahra, with my father. We walk amongst the graves for six hours and even that is not enough. With approximately one million and three hundred bodies buried, the cemetery spreads for miles. As we brush, wash and water the plants by more than twenty graves around the cemetery, my father tells me many stories about people I know and don’t know. To him, these are not stories, he says, but inseparable senses and scenes jumbled together. We spoke to the caretakers of the graves who knew exactly where lies who and how died who and who killed who and why died who. Deep in the world of the dead it wasn’t easy to question their grotesque memories of the buried.

I take over an hour to mishandle the final piece of the archive. I just can’t decide, on the photo, on the angle, on the lighting, on the dance. I do and don’t do things, I write and scratch writings, I bend, squat, change height and light. The crows are numberless above us in the sky, cawing and circling around each other and around us, sitting on a winter-dried tree and, at an unnoticeable signal, circling and circling again up in the sky. It is soon getting dark. We go back to the metro station where the golden dome of Ayatollah Khomeini’s shrine and its four minarets shimmer in the near distance under sumptuous lights. Rows of warmly lit and displaced-looking palm trees glowingly connect the mausoleum to the highway. The ordinary graves right outside the barriers of the mausoleum seem particularly dust-covered. There is no water in the taps for washing away the dust or watering the dehydrated plants.

Repeating a demanding voluntary task every day for a year put me under different emotional states. There was excitement, curiosity and uncertainty in the beginning, fear of not having enough material in the middle and hoping the year would finish sooner than later two-thirds into the year. There was also incredible joy at every step in looking back at the year and seeing how the archive had grown in these micro-actions. In the final months, I started to worry that I won’t have enough days to work with my abundance of still unused material and in the final weeks, I was very conscious that whatever material I chose to use in the remaining days, means leaving out others from my narrative. The seemingly long time frame of a year was still not enough to fit in all of the micro-histories I wanted to share.

January 18,  2018 – Back in London, walking around or taking the train, many walls, trees, corners of the streets, bins, shops, phone booths are covered, for me, with a layer of augmented reality that transforms them into a site of a now invisible action; an action that once brought residues of another time/place/people into this site. These places now host an added quality as the bearer of memories evidenced by images shared online that can be traced back to their exact point around the city.

Throughout 2017, the project was presented in different performative forms at the Live Art Development Agency, Tate Liverpool, University of Roehampton, City University of London and the Iranian Performance Week (Molavi Hall). The first performance-installation of Mishandled Archive, after the completion of the year-long phase, happened in January 2018 at Tehran’s Darbast Platform. The project is also part of the publication The Artist’s Borderpanic Compendium and will be further performed and presented in the future. 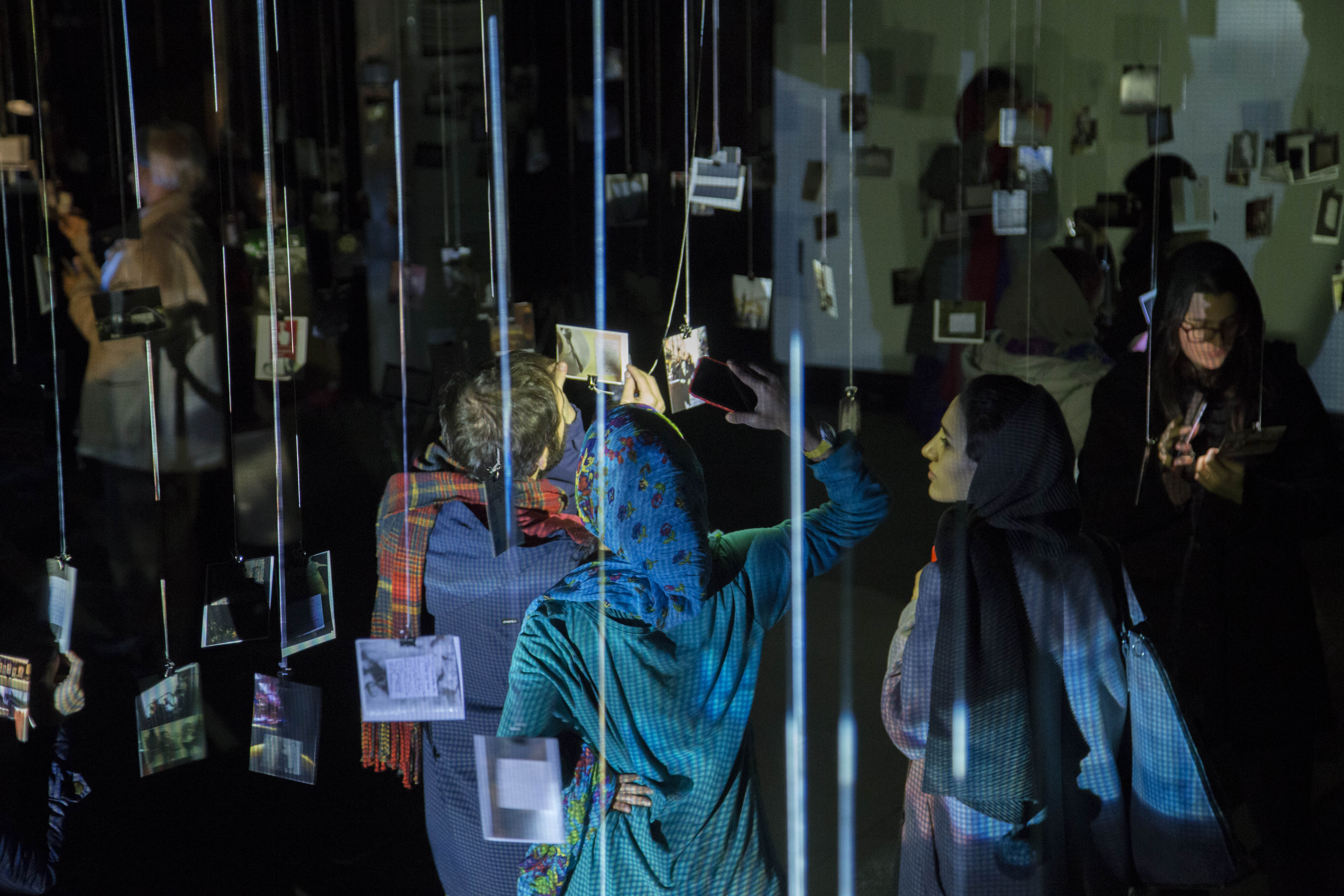 The project takes on different forms, from performance and installation to participatory dance, lecture performance, walking guides, storytelling, writing and videos or a mix of all these. The archive continues to perform and its histories will regenerate in each iteration. My eyes still look for the right spot and picture an image and a story around it only to realise I am not carrying any photos with me anymore. And I still guess the temperature with my skin but remember that I don’t have a thermometer to check if I got it right. And I still dance on the street though sometimes in my mind.

Left leg on tiptoe (195), I trot slowly for three minutes (6). Put thumb and index of left hand at the two corners of the mouth and stretch the lips into a smile, wider, wider, painful stretched lips, cracking lip skin (162), I think of the river symphony (122). I know they can just see my floral leggings (268), feel the ground (365).

Tara Fatehi Irani is a multidisciplinary artist, writer and performance maker working with mistranslated memories and unattended archives. Her work is primarily concerned with the ephemeral interactions between memories, words and sites. Follow her on Twitter @TaraFatehiIrani