It’s getting late and I’m driving through the streets of Shanghai in the back of a taxi. We pass enormous glass towers illuminated by complicated arrays of neon lights. Skeletal concrete skyways rising and dipping like spectacular funfair rides. An unreal landscape of impossible scale.

I am here with Forest Fringe, the community of artists based in the UK of which I am co-director. We are currently on the middle stop of a three city tour, supported by the British Council, in each place creating a miniature festival of unusual performances by Forest Fringe artists. In some ways it is very far from the church hall in Edinburgh where we began during the fringe festival in 2007. In other ways little has changed – the work the artists are presenting is still intimate in scale, playful in character and very low on production costs. We are still between us just about holding it all together.

Here in Shanghai you cannot help but be awed by urban spectacle that surrounds you. Amidst so much wealth, lost in such unhuman scale, how could the work of Forest Fringe possibly have any kind of impact, any kind of purpose? What are we even doing here? But then this is the seductive power of such grandeur, it convinces you that it is what makes up a city rather than the people moving anonymously amongst it. Shanghai is still just a community of people gathered in this particular place at this particular time. People who’s everyday lives are not constituted by spectacle but by the kind of intimate, incidental encounters out of which so many Forest Fringe artists weave the material of their work.

Thus far we have been to Shanghai and Guangzhou and in both places I have loved watching the hundreds of tiny interactions that have made up our Microfestivals. The playful absurdity of the Hunt & Darton Cafe, artists Jenny Hunt and Holly Darton’s appropriation of all the conventions and structures of a British Cafe as an interactive art installation. The gentle subversiveness of Richard DeDomenici and his team of local volunteer actors recreating scenes from big-budget movies in the exact locations they were originally filmed. Choreographer Simone Kenyon and performer Maria Sideri performing their beautifully simple dance piece Someone, Somewhere, Someone in the dusk light, the intimate stillness of their bodies pressing up against one another juxtaposed with the constantly shifting lights of the busy traffic beyond the glass windows of the gallery. 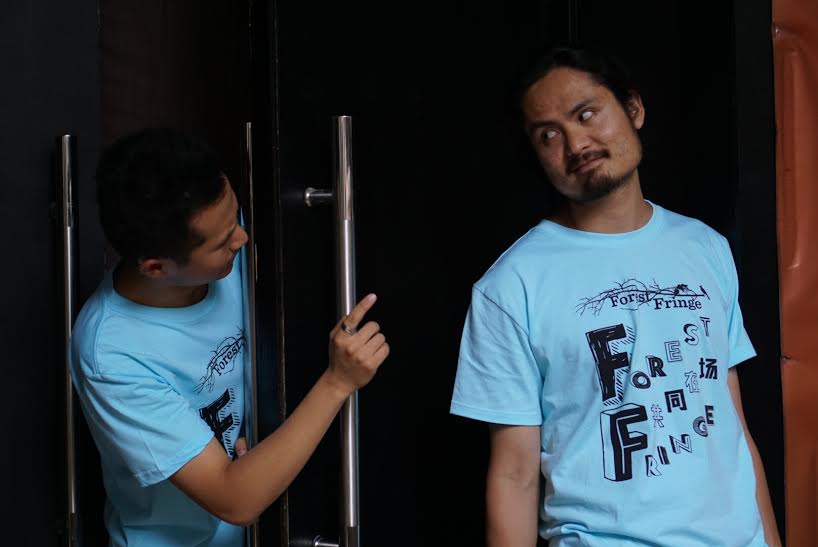 Perhaps this is precisely the kind of work that can be presented most successfully amidst the enormous edifices of contemporary Chinese cities, or indeed any cities of such magnitude. Work that resists rather than replicates this valorisation of scale and spectacle. Work that disappears into the city and its everyday interactions rather than trying forlornly to stand out from them. Work that concerns itself most fundamentally with encountering at least some of those many people moving amongst the monuments, face to face, eye to eye; work that in its own idiosyncratic way stops them and says ‘hello, it’s very nice to meet you’.

Details of the Forest Fringe Edinburgh season can be found here.

Andy Field is a theatremaker, curator, and co-director of Forest Fringe.