Anyone who chooses to tackle The Taming of the Shrew is a brave individual. Of all Shakespeare’s plays, this has arguably aged the least gracefully, with modern audiences interpreting the script’s tricky sexual politics as uncomfortable at best and grossly misogynistic at worst. It was an issue that certainly crossed the mind of David Caves, who is currently playing Petruchio in Lucy Bailey’s new touring production with the Royal Shakespeare Company.

“I didn’t know the play very well,” Caves confesses as we discuss his cautious approach to the role of ‘taming’ husband Petruchio. “I only knew that it contained some rather dodgy sexual politics as far as we’re concerned these days. I also thought beforehand that it was perhaps a play very much of its time. Then I read it and I thought yes, there is a bit of that happening on the surface, but actually there’s something more interesting and complex going on underneath.”

Since becoming much better acquainted with the play, Caves has found a different route into his character, describing Petruchio as “quite a troubled person”. Such a fresh, thoughtful approach to the character is vital if the audience is going to feel any empathy for a man who, on the surface, dominates his wife. “It’s very easy to play him as the stereotypical bastard,” Caves says, “but it’s never as simple as that. If someone behaves like that then there are probably good reasons for it.”

Caves posits that these reasons may be connected to Petruchio’s relationship with his father, who has died shortly before the play begins. “He has just lost his father, so he’s alone in the world,” he explains. “I think that the relationship with his dad has been fairly tempestuous and there’s a lot of guilt going on there. His father has recently died and he’s left with this big estate and I don’t think he’s ready for that.” Kate, meanwhile, is similarly alone, “a woman who has been completely abandoned within her own world”, a source of common ground for the two sparring characters.

“I saw it as a weird kind of coming together of two troubled people,” Caves says of the troubling, twisted relationship between Kate and Petruchio. I suggest that implicit difficulties remain, but Caves is adamant that “this doesn’t need to be a story about a man dominating a woman and the woman being submissive”. Instead, he and director Bailey have seen the pair’s dynamic as much more equal, a reading that makes this play far more palatable for modern audiences. As Caves stresses, both Kate and Petruchio give as good as they get.

“It’s a good match because Petruchio’s as wild, if not more so, than she is,” he continues. “She then sees that in him and is shocked and surprised by that – I think they’re continually surprised by each other. It quite quickly builds into trying to out-do each other with wit and not lose face and always have the last word.” There is also an instant physical attraction between Kate and Petruchio which is drawn out in this production, while Caves tells me that it was very important to make it clear that Petruchio “celebrates Kate’s anarchy as opposed to quashing it”.

This is not the first time that Caves has had to grapple with a challenging role in which his character’s behaviour and motivations are questionable. Last year he played De Flores, a servant who is dangerously infatuated with his aloof mistress, in the Southwark Playhouse’s production of Jacobean tragedy The Changeling – portraying another man who ultimately ends up dominating a woman. Caves describes the character, much like Petruchio, as “somebody who’s very lost and on his own”. 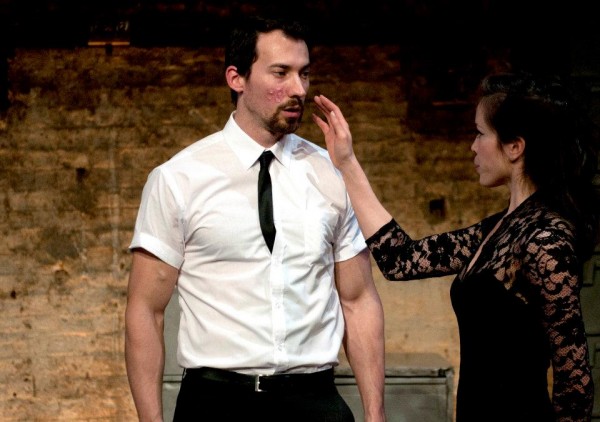 “There’s this strange attraction-repulsion thing going on between the two of them,” Caves says of the relationship between De Flores and Beatrice-Joanna in The Changeling, another complex romantic interaction. “It goes to that very base place of sexual needs and urges and denying oneself.” Despite some similarities with his current role, however, Caves explains that the two characters and his approach to these characters were markedly different. “De Flores is very still and watches everything that’s going on, whereas Petruchio is very out there and brash and loud – he talks a hell of a lot.”

Both Petruchio and De Flores continue what has emerged as a trend for Caves. His acting career, a career that came about almost by accident after abandoning plans to be a teacher, has included a generous smattering of classic drama, including a stint with acclaimed touring company Cheek by Jowl and roles in The Beggar’s Opera and The Duchess of Malfi. Were these classic plays what he set out intending to do? “I had absolutely no plans to do that,” Caves admits, “it’s just the way it’s worked out”. He does go on to add, however, that “I’m very pleased that it’s gone that way, because it’s just great writing”.

“These plays go to places that I think a lot of modern, contemporary drama shies away from a little bit,” Caves expands on his admiration for classic drama. “They go to this very dark place, a very human place.” His time with Cheek by Jowl in particular was an experience that shaped his development as an actor and that he believes has brought him to where he is now. “It was life-changing – not to be too dramatic about it!” he laughs. “Those plays were just incredible experiences with Declan [Donnellan], who’s an absolute maestro. I love him to bits, he’s an absolute genius.”

Caves also has a strong working relationship with Bailey, whom he has previously worked with on A Beggar’s Opera, demonstrating throughout our chat an enthusiasm for and commitment to her directorial vision of The Taming of the Shrew. One striking decision in Bailey’s production is the move to set the action on a bed, which Caves says is vital to this interpretation of the play. “The bed is this sacred place of birth, marriage and consummation of marriage, and finally death,” he explains its significance.

What emerges clearest about the production from our conversation, however, is a focus on Petruchio and Kate as individuals and on the strange relationship that they share. In the end, Caves argues, it is just a messed up love story in which the two lovers rescue one another. Is Petruchio, then, just an alternative white knight? “Without knowing it at the time,” says Caves, “he saves her.”

The Taming of the Shrew plays at Richmond Theatre from March 20th-24th and then tours to Bath Theatre Royal from March 27th- 31st. For more details, please click here.