Sh!t Theatre brave the drizzle at the 2013 Edinburgh fringe

This year is our 10 year Sh!t Theatre anniversary and was going to be our 13th year in a row at the Edinburgh Fringe, 10 of those as Sh!ts. We have done alright by the Fringe. It has made our theatre career, if that’s what you can call what we now have, so in celebration/commiseration of its cancellation, here’s an inside look on how we spent over a decade not getting paid in the rain:

How we afforded it: student loans, staying with pals, running away

We were in a student theatre group with our mates Rich, Lewis (who refused to come back after the first year) and Doug. We were called Unfinished Theatre. 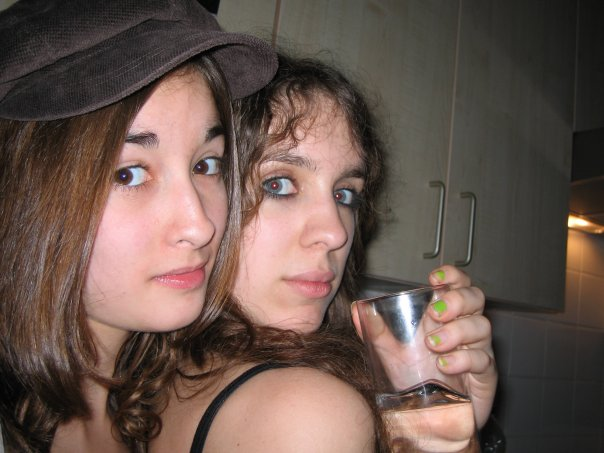 First year the show was about a frog getting hit by a car and was based on a Raymond Carver short story. We stayed for free with Rich’s family who are from Edinburgh. Rich had grown up with the Fringe on his doorstep and made taking a show there seem like not such a big deal. We never would have attempted it without his inside Fringe knowledge and his knowledge of where to get the best sandwich (answer: Rudys).

Second year our show was about a whale on holiday and was based on a Raymond Carver short story. We shared a room in a hostel on Princes Street with 40 people. A Canadian woman used to bring back people to have sex with in the bunk bed next to us. We did a runner without paying the last bit of the bill and that’s how we afforded that.

Third year we made a children’s show so offensive and terrifying we had to hire a complaints manager.

How we afforded it: Free Fringe, stayed with Becca’s brother, savings

10 years ago this August was our first ever full-length Sh!t Theatre show which premiered (and closed) at the Laughing Horse Free Fringe. We had just graduated and we played at 11.05pm in the basement of a nightclub in Leith.

The bucket coin collection paid for our beer all month. We borrowed a handheld projector from our university and projected images onto a bed sheet thrown over a clothes rail. The show was teched by Becca’s brother Ben, who was an astrophysics student at Edinburgh University and once managed to quite successfully get through a show having drunk 9 pints.

Our posters and flyers never arrived so Louise drew us 2 posters (not 2 designs, 2 posters total): 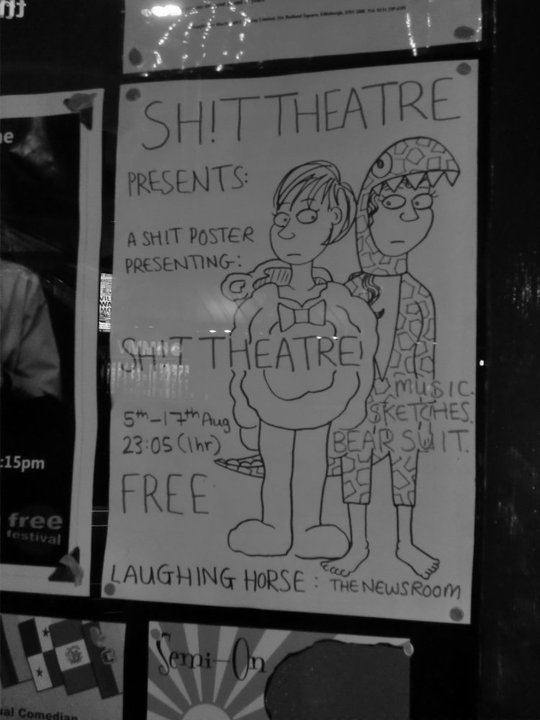 How we afforded it: Free fringe, stayed with friends for free, the dole

We were signing on this year. These were the glory days when JSA & housing benefits would (almost) cover your rent, and you were also permitted to take a 2 week ‘holiday’ anywhere in the UK, which we would conveniently take to ‘visit’ Becca’s brother Ben in Edinburgh again.

We had loads of fun, got no reviews, couldn’t afford to be in the Fringe programme, and printed black & white paper flyers out every day in an internet cafe near North Bridge. 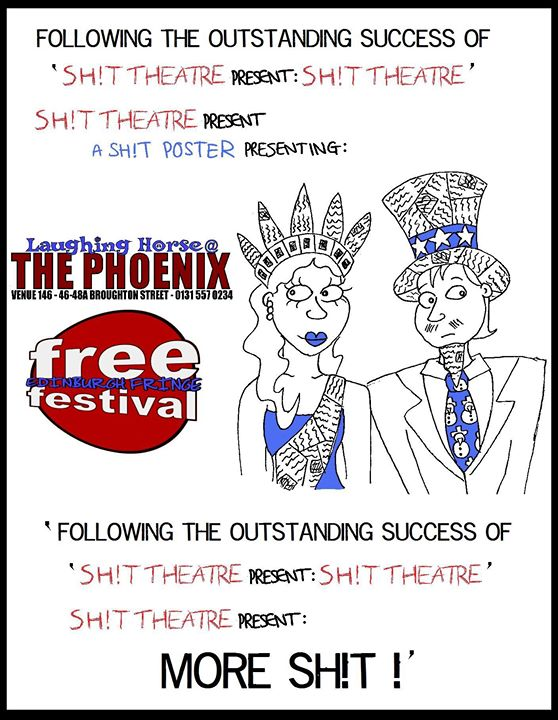 How we afforded it: Free Fringe, the dole, accommodation paid for

A weird year, in which some friends were making a documentary about us called THIS IS SH!T THEATRE, and asked to pay for our accommodation and drive us to Edinburgh in exchange for following us around with a camera. Those friends are no longer talking and we have never seen the footage. This year our show got one star reviews across the board. 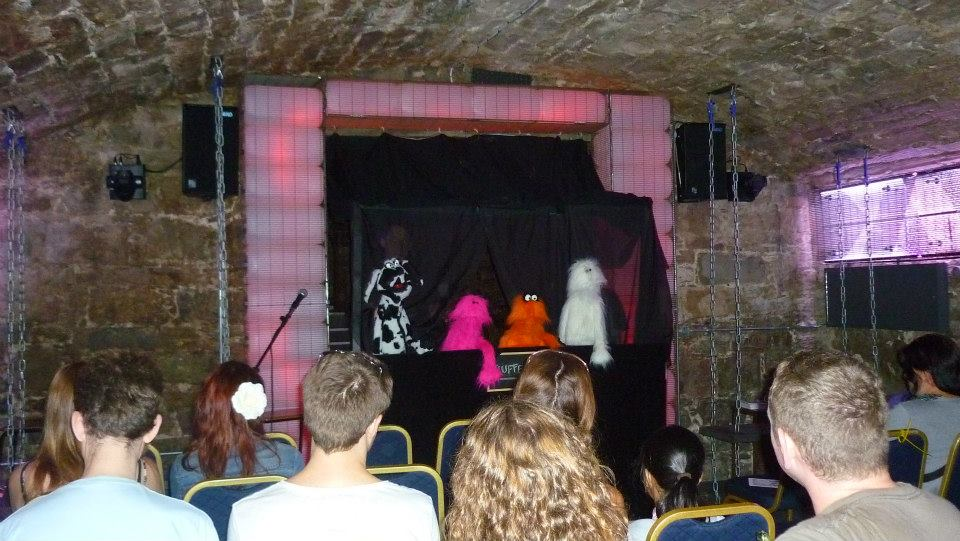 How we afforded it: Escalator East to Edinburgh funding, stayed with friends for free

Escalator East to Edinburgh is a (now defunct) Art Council scheme of ring-fenced money which would bring East Anglian artists to the Fringe, which covered our 2013 & 2014 Edinburgh Fringe venue hire, travel and tech and provided us with PR for the first time. Thank God for PR. Artists are not good at PR. Get PR! PR from a small company of people who care. No newspaper is going to review you based on an invite from a SH!T THEATRE at GMAIL address.

We held out for Summerhall and they turned us down last minute, so we booked a venue, Gryphon – which no longer exists – smack bang in the middle of the pubic triangle. At Gryphon we shared our dressing room with a live goat. 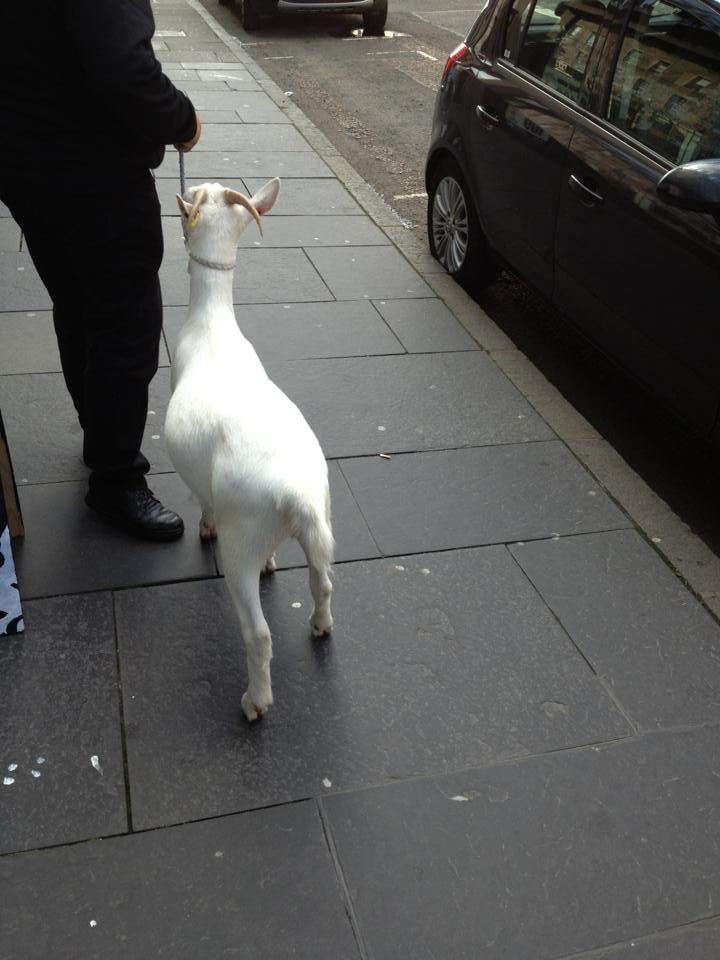 When our show JSA (Job Seekers Anonymous) was nominated for a Total Theatre award, it was so unlikely, we assumed it was a prank call.

How we afforded it: Escalator East to Edinburgh funding, stayed with friends for free, split venue costs

Edinburgh Fringe 2014 we did Guinea Pigs on Trial every other day at Summerhall, and we were also in a show we made with our pals Tim, Lewis and Phil called Burger Van. This year we stayed with Phil’s family for free, they are endlessly supportive and also have a lot of pastries in the house. Burger Van was on the Freestival, a short-lived rival to the Free Fringe whose main selling point was cheap pizza. Guinea Pigs on Trial was supported by Escalator East in its final year and was made even cheaper by us sharing the venue and only performing every other day. 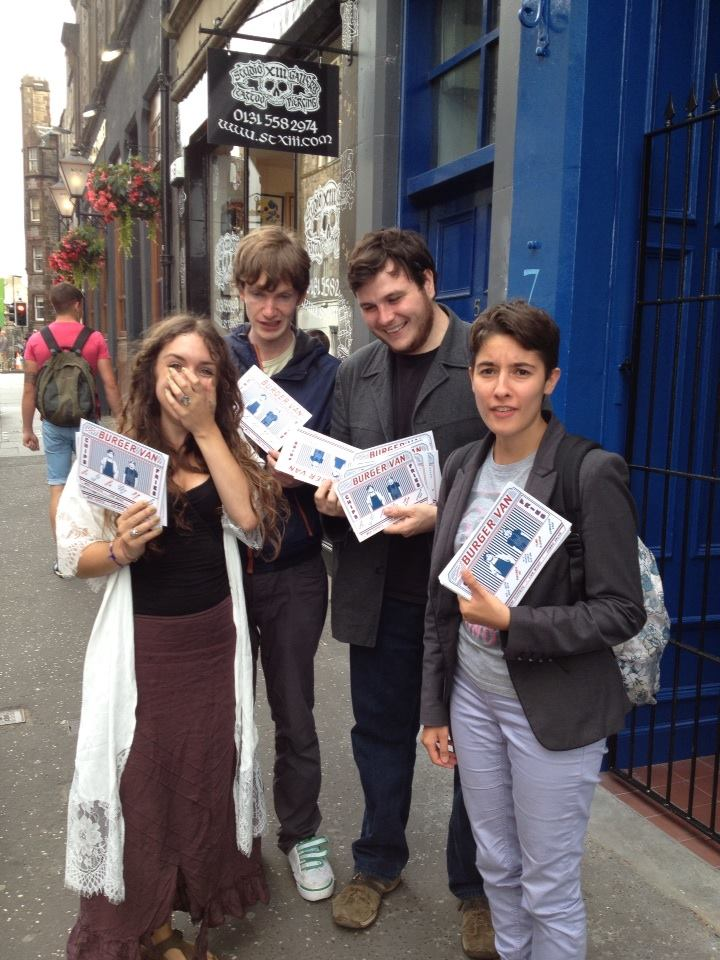 This pic is us laughing because our Freestival venue got moved last minute, making all our 1000s of flyers pointless 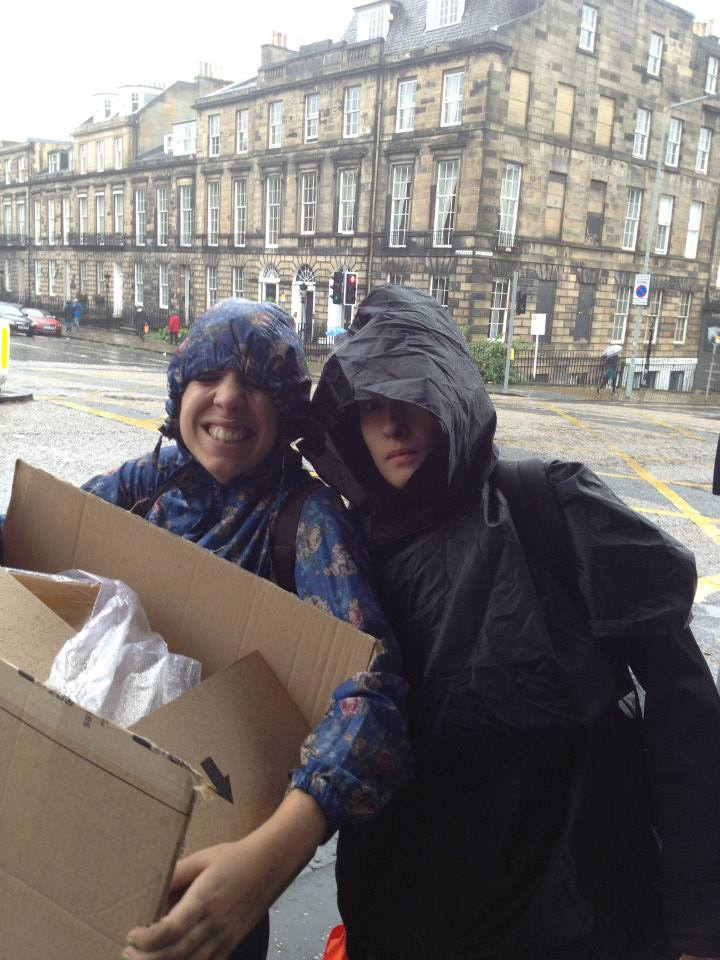 Guinea Pigs was nominated for the Amnesty International Freedom of Expression Award. The vegetarian buffet at the do was excellent.

Our favourite write ups from that year included:

Mumble Theatre: ‘For me, however, there was a distinct lack of proper entertainment’

How we afforded it: Sh!t Theatre savings, stayed with friends for free, split venue costs

Women’s Hour in the Anatomy Lecture Theatre at Summerhall was our first year funding ourselves without Escalator East or the Free Fringe. We shared our venue again with our friend Eric, which kept the venue hire down, and stayed with Phil and his family, sharing one room and waking up every day to Jen’s Dolly Parton Best Of album as an alarm clock. We saved money during the year to cover travel and PR, which we are now totally dependent on.

Mumble came back to review us this year to see if we were to offer any proper entertainment:

‘a light hearted Lesbian Romp was just the ticket…. Take a cushion and a box of tissues!’

How we afforded it: produced, stayed with friends for free

Letters to Windsor House was the first time we’d been produced, which means the producer/management company will front the money for the venue, programme, PR and travel and take their fee and expenses from your ticket sales. This was the first time in 6 years (9 including Unfinished Theatre) that we got a 5 star review. 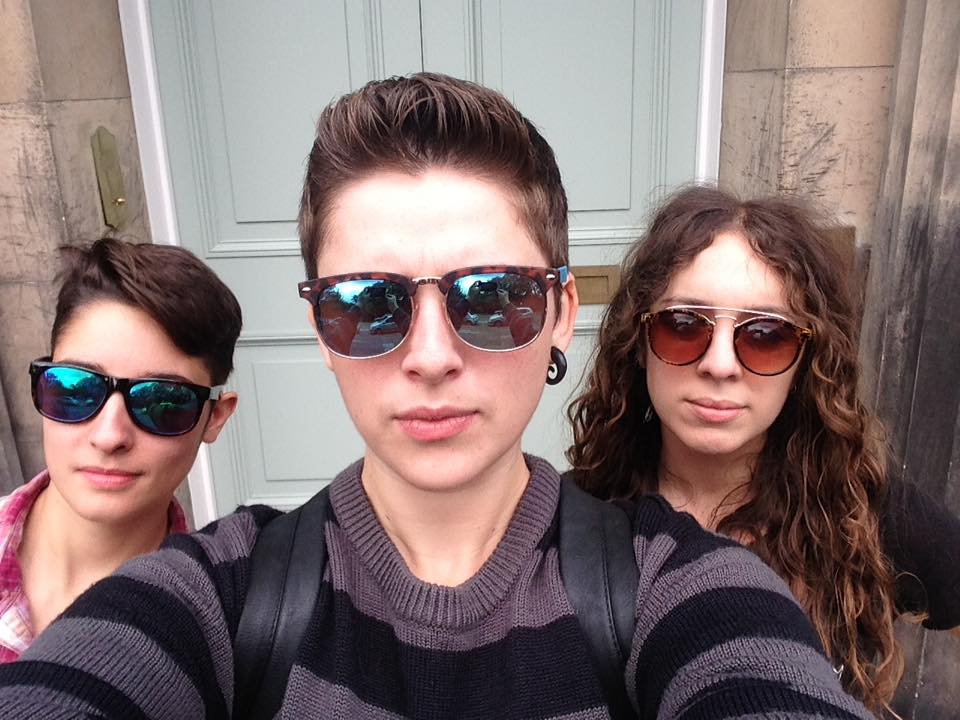 The most significant moment this year was that we went on Get Your Own Back Live representing ‘Performance Artists’ versus ‘Comedians’, and got gunged. To win the finale you had to complete the thrilling task of eating half a tin of cold beans and downing a pint of soda water.

How we afforded it: produced, shared bedrooms with other artists

In early January 2017 we did a work-in-progress DollyWould show at Camden People’s Theatre that was so bad our directurg Adam begged us ‘is there anything else at all you can take to Fringe next year?’

At Edinburgh 2017, DollyWould premiered at Summerhall. We’d been moved to a 9pm slot in a bigger room and would hide in a cupboard onstage behind the black curtains waiting for the audience to file in. Becca hates late shows because of the day spent with stage fright and Louise also had a gig every morning so was exhausted. We were all sharing a few rooms in a dark and depressing flat in Leith. If you put the kettle on when the lights were on, the electricity would blow.

How we afforded it: produced, shared bedrooms with each other.

We felt like we were cheating this year as we took DollyWould to Summerhall again, for only two weeks, following the first on-purpose two weeks off  we’d had in eight years. It’s hard to take holidays when you are constantly terrified of missing out on work.

We were in the Main Hall where we’d seen our favourite show of all time, Looking For Paul by Wunderbaum, years before.

How we afforded it: produced, WE HAD A BEDROOM EACH FOR THE FIRST TIME EVER

Sh!t Theatre Drink Rum With Expats. We were very nervous being produced by the Soho for the first time, having idolised the venue for years, but they saved our technologically-cursed show repeatedly throughout the run. We felt a lot of pressure this year and the main emotion we felt all month was relief that it didn’t go totally tits up. 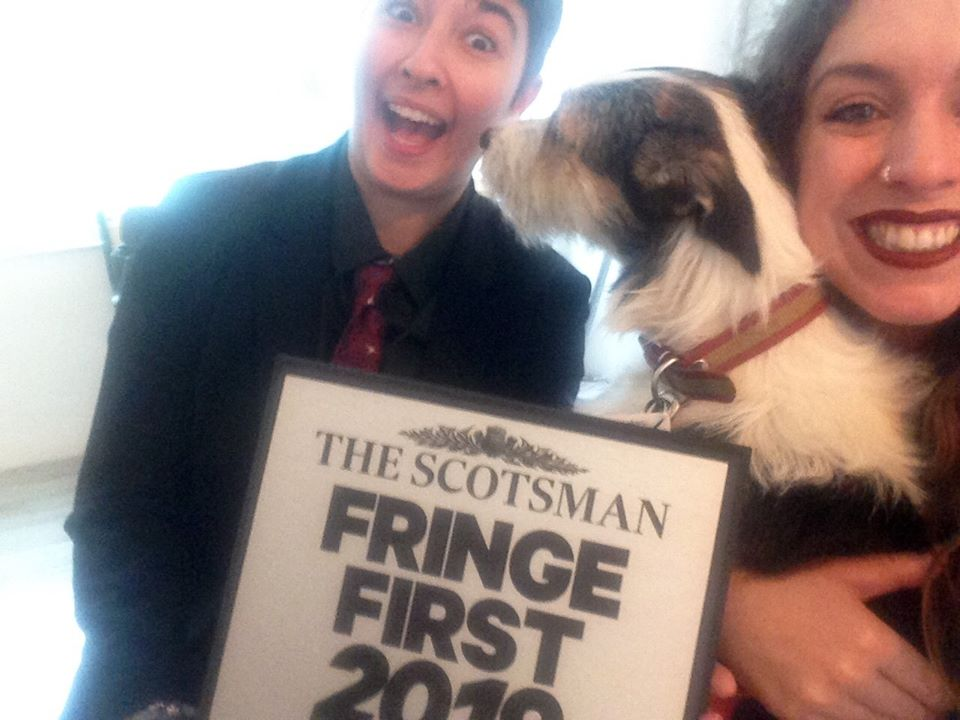 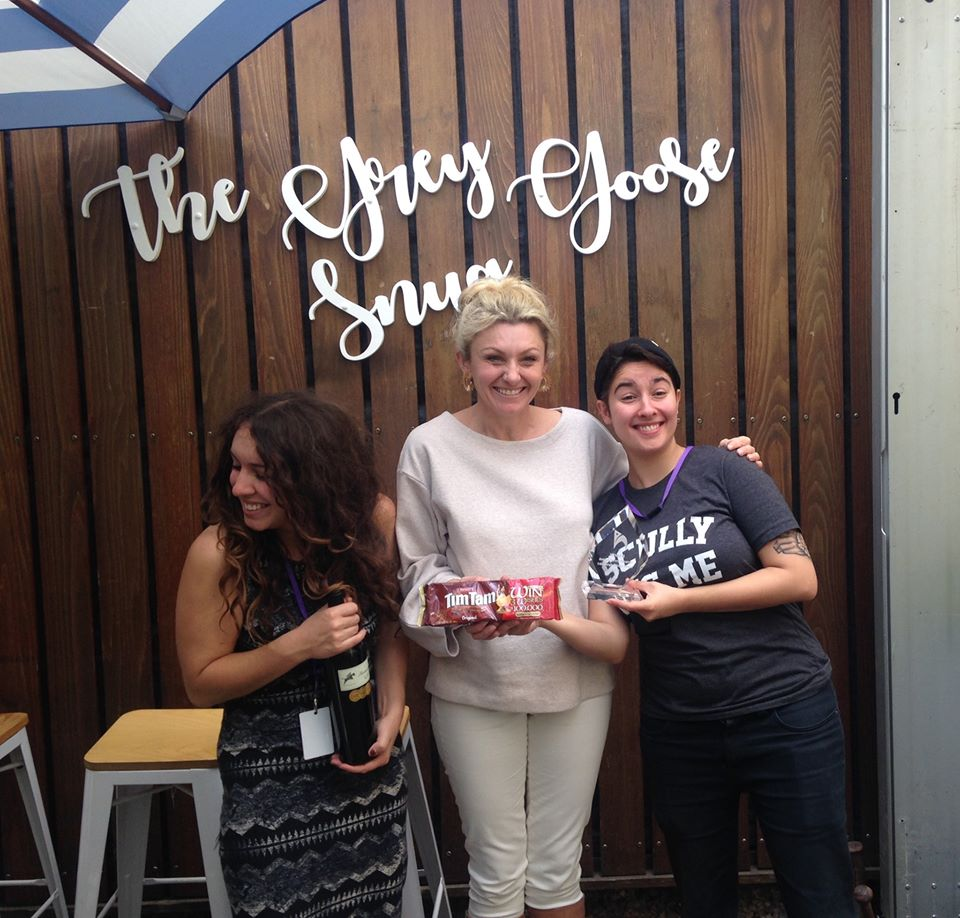 Happy Anniversary to us!

Correctly known as Sh!t Theatre (Exeunt's interface prefers swearing to exclamation marks), Louise Mothersole and Rebecca Biscuit have been performing together since 2010. They are Associate Artists of Camden People's Theatre & The Bush Theatre.